America’s cities are showing ever more signs of corruption and it is spreading throughout the states they dominate, to the detriment of sane energy policy.

American urban areas simply can’t manage themselves. Yet, they have taken over state governments by their sheer numbers, cloistered  city dwellers with little knowledge of anything about the land governing vast swaths of it to the detriment of all those who live there. And, they govern poorly. New York City, Chicago, San Francisco, Boston, Seattle and Philadelphia long histories are emblematic of urbanization, with layers and layers of intractable corruption made possible by throngs of those who wonder no further than what government can give them. 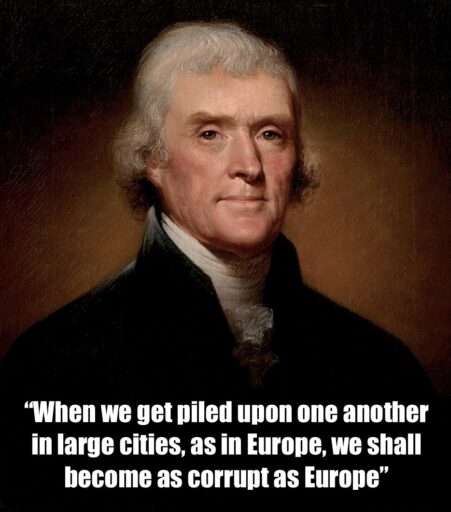 Frankly, the real problem is the gentrification of large American cities populations and the ossification of city infrastructure. The former has yielded population of two sorts; the very rich and the very poor, with no reasonable middle class. The rich seek to patronize the poor and keep them at a distance, which has meant having escapes to rural areas they desperately want to keep just as they are. The rich have, in fact, little interest in providing for growth or infrastructure in either place. They prefer to invest elsewhere; China, for example. What we have, as  a result, is  long term failure of governance in most big cities here and abroad. It could not be more obvious.

While urban areas such as New York City, Washington D.C. and Los Angeles have controlled most of the media and political discussion about fracking and climate change, the rural areas, which are predominately middle-class, are actively pursuing a more balanced approach to energy and economic development in the US.

There is one factoid that most accurately describes the great divide between the city and the country: “Private rural areas cover 97 % of America’s land, but contain only 19.3 % (about 60 million people),” wrote Census Bureau Director John H. Thompson.

The 270 million or so urbanites need to be reminded that they know precious little about rural life and yet they somehow feel intellectually and morally superior to it. Ultimately, the rural areas control most of the American private property rights, which is surely just as important as the First Amendment.

In all fairness, the rural population deserves to have more effective control over their land, their water and their economic lives. Instead, they are captive to city attitudes, city perspectives, city ignorance and, worst of all, city votes.

City dwellers say they want to do something about global warming, for instance. They’re told it’s all the fault of fossil fuels by those who live in fossil fuel heated castles and are either blithely unaware or deliberately of forked-tongue. Why? Because, in terms of emission reduction strategies, the Shale Revolution (done mostly on rural land) has reduced more emissions that any carbon tax, cap and trade, state or national mandates, or renewables.

Nonetheless, the rural areas comprising 97% of American are still being given short shrift politically, environmentally, and economically. The irony is that rural areas are better at local governance, while being more fruitful for entrepreneurs and capital formation.

Blame it on urbanization and its many, many arrogances.

Editor’s Note: Steve touches on the reality of energy politics today. The energy debate is largely between the privileged few of special interests and those of a rural middle class who just want to get on with it; it being a reasonable politics that recognizes just how much we owe to the Shale Revolution. The bulk of urban voters are simply caught up in the maelstrom, largely ignorant of anything practical and easily manipulated. Hence, the mess we have now in virtually all our large cities. Jefferson may have missed the fact great cities are at the heart of great cultures, but he wasn’t wrong either when he said “When we get piled upon one another in large cities, as in Europe, we shall become as corrupt as Europe.”

One thought on “Cities, Baffled by Fracking, Are Vulnerable to Corruption and Decay”