The press has a bad case of the China Syndrome, believing the hype about that country suddenly leading in reducing CO2, when it’s the U.S. that’s doing it.

When the U.S. announced last June that it would pull out of the Paris Agreement, China—the world’s largest emitter of carbon dioxide—declared it would pick up the mantle and lead the world in the fight against climate change.

Whether India (the other leading CO2 emitter) talked China into this brazen move hoping to get in on the action, or it was just some sort of global prank, the gambit paid off big time. Almost immediately, headlines around the world heralded China and India as the new global leaders in the fight against climate change.

“It didn’t take long for China to fill America’s shoes on climate change,” declared TIME magazine. National Geographic reported “China and India are massively overachieving” in their efforts to fight climate change. Turning up the rhetoric a notch, the Telegraph of India warned “Renegade US to owe lives to India, China.”

And on November 12, The New York Times reported that China “appears quite content to move from co-leadership [with the U.S.] to sole leadership,” on climate change. It was all hype.

Though highly successful, the charade was short lived. On November 13, one day after the Times bestowed the “sole leadership” title to China, researchers with the Global Carbon Project announced at the United Nations climate talks in Bonn, Germany that after nearly zero growth in 2014, 2015, and 2016, “humanity’s carbon emissions are likely to surge by 2% in 2017, driven mainly by increased coal consumption in China.” 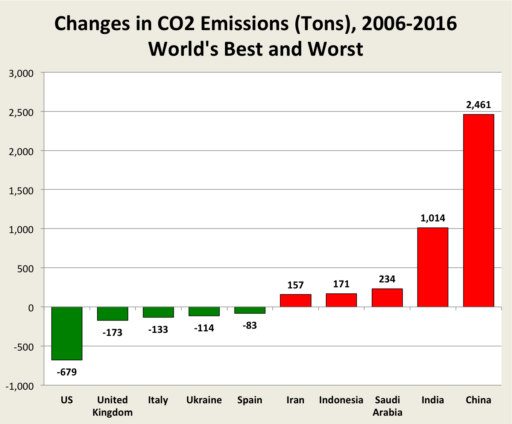 China’s emission of CO2 this year, they said, “is expected to surge by 3.5%, to 10.5 billion tons.” This increased coal use in China “appears to be driving the first increase in global greenhouse-gas output since 2014.”

So while it’s true that China was formally recognized on the world stage as the leader in climate change, it was for leading the world in carbon dioxide emissions, not for reducing them. That honor belongs to the U.S.

China, on the other hand, has only committed to reducing its carbon intensity, which is the amount of CO2 released for each dollar of economic activity. China has no plans to cut its overall emissions until at least 2030 under the terms of the Paris Agreement.

Meanwhile, the U.S. is leading the world in CO2 emissions reductions.

The key to our success is natural gas. The vast majority of the emissions decline in the U.S. can be attributed directly to natural gas replacing coal in power generation, according to data from the U.S. Energy Information Administration.

And while we’re busy leading the world in CO2 reduction, others are having a very difficult time meeting their arbitrary goals. The United Kingdom is on track to miss its 2030 carbon emissions target.  Ireland is going to miss its 2020 climate targets “by more than expected,” and is “a very long way” from their 2050 target. The Netherlands will also miss their 2020 target and fear they “will still be bungling at the bottom of European lists in 2030.” And Germany will “disastrously” miss its 2020 target for cutting emissions, dealing a “significant blow to Germany’s climate policy.”

Meanwhile, we’ll have the satisfaction of knowing that our development of natural gas extraction technology and the pipeline infrastructure to deliver it safely across the continent is helping us maintain our position as the world’s leader in the reduction of CO2 emissions.