[Editor’s Note: As Bob Bradley explains, Chevron is speaking truth to the politically correct powers who want to milk “green energy” for all it’s worth.]

The loaded title: “Chevron’s Answer to Climate Change Is to Keep Drilling for Oil” (August 13, 2020). The condemnatory subtitle from Bloomberg Green’s Kevin Crowley and Bryan Gruley: “The energy giant believes it can still wring years of profits from fossil fuels while its European rivals embrace renewables.”

Go Chevron! The global and U.S. market share of fossil-fueled energy is 84 percent and 80 percent, respectively. And these percentages could well increase, not decrease, due to strong consumer demand for dense, reliable energies–and taxpayer fatigue for inferior substitutes (wind, solar, ethanol, batteries/EVs).

Fossil-fuel optimism is not only realistic but a great story. Speaking truth to Greenout Power demotes political correctness and promotes economic understanding. 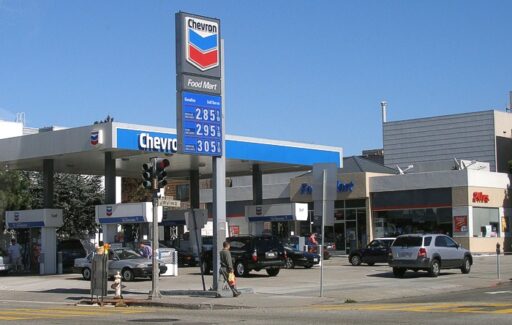 The Bloomberg article follows with my interspersed comments:

Speaking to the Texas Oil & Gas Association in July, Chevron Corp. Chief Executive Officer Mike Wirth assured his audience that the global clamor for clean energy “doesn’t mean the end of oil and gas.” On the contrary, Wirth said, the energy business is simply undergoing another of its natural transitions. “We’ll find ways to make oil and gas more efficient, more environmentally benign,” he said. “And it will be a part of the mix, just as biomass and coal are still enormous parts of the mix today.”

Comment: Quite true. Oil and gas remain dominant as they have been for a century or more. (Coal, when viewed globally, remains an energy powerhouse too.)

To activists alarmed at the urgency of the climate crisis, Wirth’s comments are as out of touch as they are predictable, coming from someone who profits from the status quo. For unlike its rivals in Europe, Chevron is betting its future less on renewable energies such as wind and solar and more on the subterranean stuff derived from hydrocarbons. It’s a multibillion-dollar gamble that would have been even less surprising before the coronavirus reared its spiky head. By eviscerating demand for petroleum products when business and consumer activity suddenly slowed, Covid-19 has shown the world’s biggest oil and gas companies a vision of a bleak future in which they’re neither wanted nor needed.

Comment: Out of touch? Or just politically incorrect? Media bullying by climate alarmists and keep-it-in-the-ground obstructionists will come and go; a pro-consumer, pro-taxpayer company should not lose focus.

Tying Chevron’s viability to what is going on in political hot-spots and pretending that Covid is a negative game changer for fossil fuels is disingenuous.

A chastened BP Plc responded on Aug. 4 by announcing dramatic steps to address climate change, including an unexpected vow to reduce oil and gas production 40% over the next decade; CEO Bernard Looney said the strategy was “amplified by Covid.” In sharp contrast, Exxon Mobil Corp. has reiterated its commitment to being oil’s last man standing decades from now. Chevron, for all of Wirth’s prognosticating about crude’s bright future, is pursuing a more nuanced path that embraces something frequently alien to Big Oil: flexibility.

As in Enron, GE, and other ‘greenwashing‘ companies? As in James E. Rogers (Duke Energy)? Chevron needs to run in the other direction.

… [The next paragraphs go into Chevron’s recent business strategy.]

So far, Chevron’s public approach to climate change is in contrast to those of BP, Shell, and France’s Total. All three have pledged to speed up their shift to cleaner fuel sources so as to align with the Paris climate agreement and become “carbon zero” by 2050. To underwrite their green transitions at a time of low oil prices, BP and Royal Dutch Shell Plc have cut their highly prized dividends.

Comment: Thank goodness! Chevron should steer toward the market, not politics. And with trends shifting against political energies, and getting its costs in line with revenues, Chevron is well positioned to benefit stockholders.

Chevron and Exxon, which have pledged to sustain their quarterly payouts, say they support the “goals of the Paris Agreement,” but they haven’t committed to zero carbon. They have targets to reduce emissions from their own operations but not those of their products, unlike the Europeans. Their stances are politically easier in the U.S., where fossil fuels are a big job generator with strong advocates in Congress.

Comment: Greenwash avoided. These two energy majors are not governments. The Paris Accord is a voluntary, aspirational agreement that is being left behind by virtually all of its carbon-energy-driven signatories. The U.S. will formally withdraw in early November.

Rather than switching to low-carbon fuels like the Europeans, Chevron is avoiding extravagant bets and resisting moves into renewables, where it has little expertise and perceives returns to be lower. Wirth is leery of repeating mistakes such as Chevron’s disastrous investments in geothermal power 20 years ago. “For our shareholders, we’ve got an obligation to invest in things we can do wisely and that can generate good returns,” he told Bloomberg last year. “We haven’t seen that in the power sector.” A Chevron spokesman says many experts believe oil and gas will constitute half of global energy consumption for at least two more decades, especially in developing countries. “All our actions are consistent with our long-standing financial priorities—and No. 1 is to protect the dividend,” he says.

In theory, Chevron wants to become a nimble, low-cost energy operator, capable of swift responses to global demand patterns. In practice, that’s a ways off. Just last year the company admitted it ran 25% over budget on a $45 billion oil project in Kazakhstan, recalling some of the worst excesses of the days before 2014, when oil traded at more than $100 a barrel. Chevron also posted a second-quarter loss of $3 billion—its worst in at least three decades—and wrote down $4.4 billion in assets. It’s ratcheting back on the Permian and other shale plays. To Wirth, this is flexibility in action. To critics, the deep losses are another nail in the coffin of fossil fuels.

Comment: Nope. For anyone who knows energy history, boom-and-bust cycles do not mean the demotion of oil or natural gas. Once costs are realigned with revenue, it is off to the races. Chevron looks to be a leader.

Climate activists scoff at Chevron’s relatively small investments in biofuels, wind, and solar to support oil production, claiming they have little discernible effect on global emissions. But Mariana Liakopoulou, energy security research fellow at the NATO Association of Canada, says Chevron’s approach, though not purely climate-driven, “can help them generate the quickest possible cash flows in the short to medium term.” She says that revenue could then be used “to progressively diversify into low-carbon assets and renewables, provided that climate change is also recognized as a priority of the U.S. administration.”

Comment: Inferior energies have bad economics in the medium and long term, not only the present.

But what if oil demand doesn’t recover for years, as Shell CEO Ben van Beurden recently suggested? And BP’s Looney won’t rule out the possibility that post-pandemic demand has already peaked. Those are horrifying prospects for oil companies, which have long thrived as providers of a scarce resource that underpins the world economy. The resource is scarce no longer, because of shale, and BP is predicting that crude prices in coming decades could trend as much as 20% lower than the company forecast only two months ago.

Comment: “Peak demand” theory is already in trouble. Shell’s Van Beurden and BP’s Looney might get a strong media play from their pessimism about oil demand, but reality will bat last.

The risk for Chevron is that it gets left behind, producing a lot of climate-endangering oil and gas that no one needs. Wirth insists he’s comfortable with that risk, because, like so many energy transitions, this one is “misunderstood.” As he told the Texas Oil & Gas Association, new technologies buttressed by free markets will help oil giants prosper even as they tackle climate issues.

Comment: False. This is propaganda trying to get a free-market company to go political. Resist.

Wirth pointed to whales as a case in which oil companies were able to expand their traditional business while producing positive change for the environment. Back in the 19th century, the creatures “were being whaled into extinction,” Wirth said, because their oil was needed as fuel for lighting. Then crude oil companies came along with kerosene to replace it. “Ironically, ‘Save the whales’ is a catchphrase for saving the environment,” he said. “In fact, our industry helped save the whales.” Whether sticking with fossil fuels will make endangered species of Chevron and its brethren remains to be seen.

Comment: Chevron CEO Wirth is right. Fossil fuels have been–and will be–good for the environment, a story for another day.

And no, Bloomberg Green’s Kevin Crowley and Bryan Gruley: fossil fuels will not “make endangered species of Chevron and its brethren.”

1 thought on “Chevron Speaks Truth to Greenout Power: Oil and Gas IS the Future”