The Catskill Mountainkeeper is a Rockefeller enterprise, an off-shoot of the Open Space Institute and the NRDC. It’s also an elitist tax-exempt con game.

The Catskill Mountainkeeper is the phoniest of phony anti-fracking groups. Created as ac spinoff of the Open Space Institute, which is itself a spinoff of the NRDC, it is a Rockefeller enterprise, through and through. It` is run by Ramsay Adams, son of Rockefeller champion John Adams, who helped found the NRDC and later create OSI as a vehicle for making a wilderness around Larry Rockefeller holdings in the Catskills and make money off the State of New York in the process so ever more of the Catskills can go into that wilderness playground for the rich.

Catskill Mountainkeeper directors interlock with those of OSI and the NRDC. It is largely political, but pretends to do little that is political, so as to maintain its status as a charitable organization and its ability to lobby with tax-exemption. It’s also part of a solar scam that allows Governor Corruptocrat to feed it money to oppose things such as pipelines; anything that would lift Upstate New York economically and make it’s land more valuable and less easily purchased.

Catskill Mountainkeeper is, too, taking big gobs of money from out-of-state funders and serving as a facilitator in pushing the anti-fracking gospel to other states, spreading Big Green wealth around.

The Big Green carpetbagging of elitist foundations is nothing new, of course, the IER database provides a excellent tool for examining this fraudulent aspect of American political life. I decided to look at what it had on the Catskill Mountainkeeper and found this data: 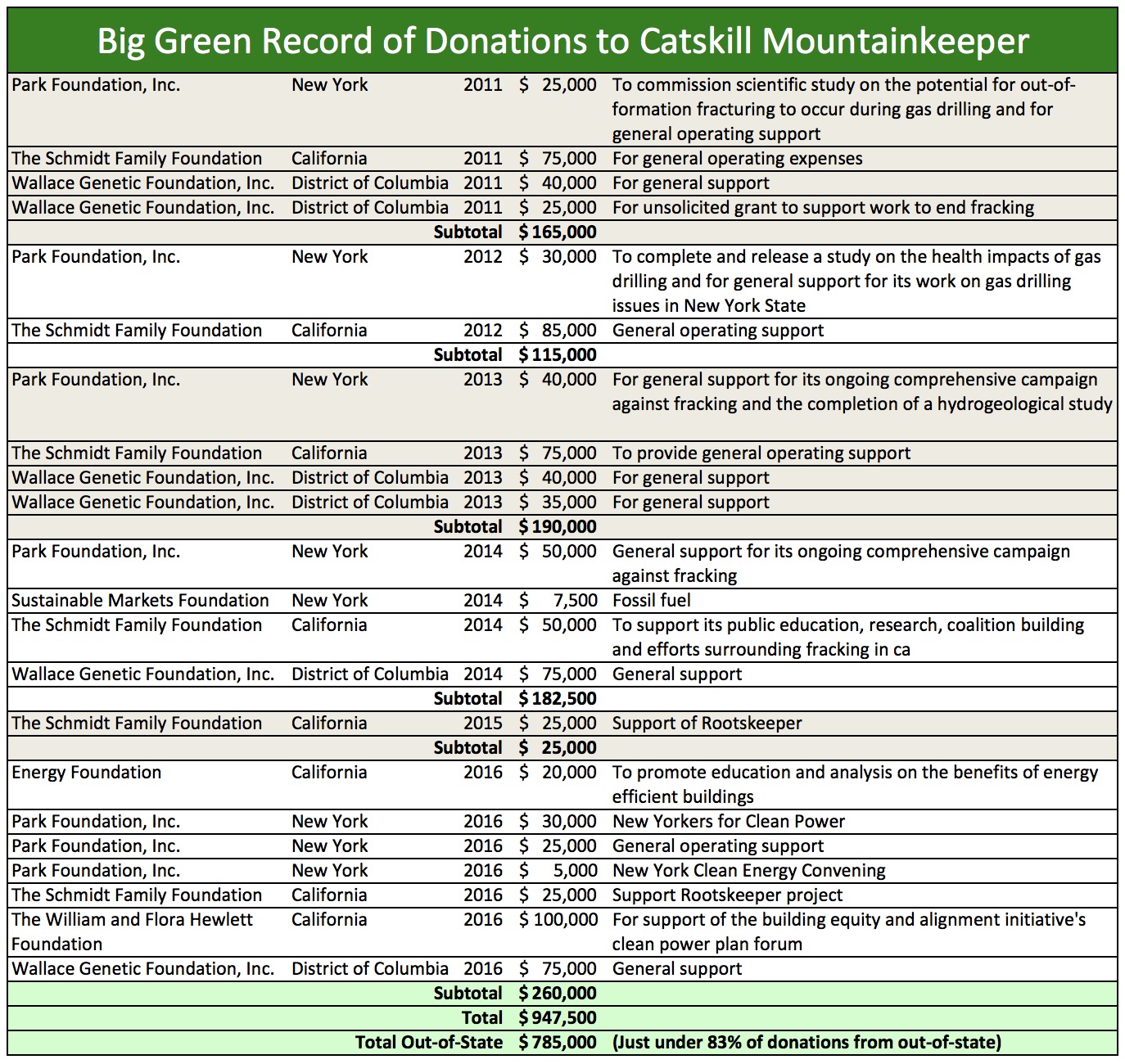 This does not include anything close to all the money that goes to the Catskill Mountainkeeper but it does provide a view into some primary repeat funders. Notice the following:

I’ll be digging deep into the Big Green database with additional posts down the road but what’s happening with the Catskill Mountainkeeper is a microcosm of the fractivist cause; bought and sold by wealthy elites who desire to be masters of the universe.

One thought on “The Catskill Mountainkeeper Con Game Continues”