Carbon pricing has a certain appeal to people who know markets are the best way to choose in a free world but, sadly, it isn’t that simple in this case.

The New York Independent System Operator (NYISO) is currently campaigning for its Carbon Pricing Initiative as the preferred approach to meet the requirements of New York’s Climate Leadership and Community Protection Act (CLCPA).  For example, they sponsored a blurb in the Politico New York Energy daily newsletter.  I have written extensively on my issues with the NYISO initiative and this post explains my concerns with carbon pricing schemes in general. 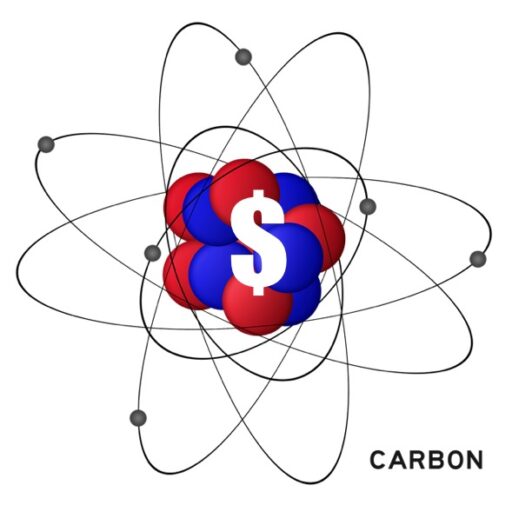 The World Economic Forum, an organization for public-private cooperation, engages the foremost political, business, cultural and other leaders of society to shape global, regional and industry agendas. New York, the 11th largest economy in the world, recently enacted the United States’ most aggressive climate change legislation. The New York ISO’s proposal for carbon pricing would embed a cost per ton of CO2 emissions in the sale of wholesale electricity, creating a price signal for investment in new clean energy resources. Read article here.

Carbon pricing theory says that when the price of energy is raised by adding a cost for carbon, the increased costs at the higher CO2 emitting sources of energy will provide incentives to transition to lower or zero CO2 energy sources.  This is supposed to lead to the most cost-effective reductions.  I think that there are a number of practical reasons that carbon pricing will generally not work as theorized: leakage, revenues over time, theory vs. reality, market signal inefficiency, and implementation logistics.  Based on those concerns the NYISO plan is not going to solve anything in NYS.

Leakage refers to the situation when a pollution reduction policy simply moves the pollution around rather than actually reducing it.  Ideally you want the carbon price to apply to all sectors across the globe so that cannot happen.  I don’t think a global carbon pricing scheme is ever going to happen because of the tradeoff between the benefits which are all long term versus the costs which are mostly short term.  I don’t see how anyone could ever come up with a pricing scheme that equitably addresses the gulf between the energy abundant “haves” and those who don’t have access to reliable energy such that “have nots” will be willing to pay more to catch up with those who have abundant energy.

Ultimately, I think that leakage will be a problem for any limited area carbon pricing policy.  Trying to force fit this global theory into the New York electricity market is an even more difficult problem.  As proposed, it will likely result in locational leakage where energy and emissions are not reduced but simply shift emission location within the inter-connected electric grid.   Additionally note that a carbon price on just the electric sector may result in leakage if more consumers generate their own power using unpriced fossil fuel.

A fundamental problem with all carbon pricing schemes is that funds decrease over time as carbon emissions decrease unless the carbon price is adjusted significantly upwards over time.  This problem is exacerbated because over time reducing CO2 emissions becomes more difficult.  It has been observed that roughly 80% of the effects come from 20% of the causes and everyone knows the meaning of low hanging fruit.

This has been observed with regard to New York’s observed CO2 emission reductions to date.  New York electric sector emissions dropped 56% between 1990 and 2016 mostly by retiring old units and fuel switching to lower emitting fuels.  It can be argued that those reductions would have happened anyway because retirements and fuel switching were lower cost options without even considering CO2 emissions.   Furthermore, I believe that air pollution control costs increase exponentially as efficiency increases which makes this issue even more problematic.

This difficulty should be even more of a concern with CO2 emission reductions because at some point replacing existing fossil-fired generation not only has to consider the direct power output conversion costs but must also address dispatchability and grid support costs.  When those costs are included there will be a sharp increase in total costs per CO2 reduced.  Like many others, the NYISO Carbon Pricing Initiative proposes to use the social cost of carbon (SCC) as the carbon price.  The SCC cost increases over time but the costs over time do not increase enough in my opinion to keep pace with the necessarily more expensive total costs to maintain reliable electricity to consumers.

Another problem with carbon pricing theory is that in practice affected sources may not act rationally or as theory expects.  The Regional Greenhouse Gas Initiative (RGGI) is a market-based carbon pricing program and I have written extensively on it.  The academic theory for RGGI market behavior is that affected sources will treat allowances as a storable commodity and act in their own best interest on that basis.  If that were true affected sources would be purchasing allowances for long-term needs and “playing” the market to maximize earnings.  In practice RGGI affected sources plan and operate on much shorter time frames and have shown no signs of making compliance obligations a profit center.

Carbon pricing theory claims that when the cost of using higher emitting energy increases that will provide incentives to develop alternatives and discourage continued use of existing resources.  However, these incentives are indirect and again assume rational behavior in the market.  While theory says that a company that currently operates a fossil-fired plant will change its business plan and develop a renewable energy facility to stay in business, there are a whole host of reasons why the company may not go that route and instead treat the carbon price as a tax and continue to operate with that constraint.  In my opinion RGGI did not induce any NYS companies to change their business plans.

I combined the data for the six program categories in the Consolidated Summary of Expected Cumulative Annualized Program Benefits through 31 December 2018 table.  It summarizes the emission reduction benefits and costs for those categories.  The cost per ton reduced ratio ranges from $167 to $3,437.  At the high end the GHG Abatement Strategies category emphasizes long-term research and development.  Because this research could lead to a cost breakthrough this funding can be justified.

Looking at the other categories it appears that the more investments are focused on direct reductions rather than indirect investments the better the cost benefit ratio.  For example, the best ratio ($167 per ton removed) is in Community Clean Energy and that category includes direct support for renewable energy projects.   The Energy Efficiency category is an example of indirect support because investments in this category do not directly reduce emissions.  Instead the investments reduce energy use which reduces the need for energy production and indirectly reduces emissions.  However, the cost per ton removed, $425, is markedly higher than the best category.

Theory says that the carbon price alone can incentivize lower emitting energy production and that the market choices will be more efficient than government mandated choices. However, as a result of these observations, I do not think that carbon pricing schemes, like the NYISO initiative, that raise the cost of energy and do not include specific funding aspects will work as efficiently in the short term and in limited markets like New York as theory suggests.  There are risks involved so who is going to make the investments and when will they make investments?

Finally, I believe that there are significant logistical issues associated with carbon pricing that the NYISO process has simply ignored.  In order to set a carbon price, you have to know what the carbon emissions are for every source providing energy to the market.  For a global all-sector pricing scheme, you could set the price as the fuel is produced so that everyone pays the cost all the way through its end use.  On the other hand, the NYISO has to set the price as electric energy is sold on a real-time basis.

That is a non-trivial problem.  In New York, NYISO knows which generator is running and has a pretty good idea of their emission rate.  However, the final emission numbers are not available real-time because the emission values reported to prove compliance are not finalized until quality assurance post processing is complete and that can be months after the fact. The more significant problem is that NYISO has no way to calculate imported electricity carbon emissions on a real-time basis so cannot assign a carbon price value that accurately reflects how imported electricity is being generated.  These issues have been glossed over to date.

The success of any carbon pricing scheme boils down to the question whether the carbon price set will provide enough of an incentive for projects that produce emission reductions that displace today’s generators and eventually covers the costs to provide the dispatchability and grid support functions provided by today’s generation mix. There are no estimates that this will be the case for the NYISO initiative.

In my opinion, NYISO carbon price initiative support is based on parochial interests.  In the case of NYISO they appear to believe it will simplify the cost accounting for New York’s renewable implementation efforts.  I think they have under-estimated the difficulty implementing the infrastructure necessary to accurately track the price of carbon and have ignored the potential that the complex scheme needed to reduce leakage will lead to unintended consequences.  Other support appears to be based on the potential to make money and it is not clear that is in the best interest of the State’s desire to reduce CO2 emissions as cost-effectively as possible.

The more I study the practical implementation of carbon pricing schemes the more skeptical I become.  I think that there are a number of practical reasons that carbon pricing will not work as theorized.  Because a global program is impractical, leakage is always going to be a problem.  The carbon price has to be set such that revenues over time increase significantly.  The economists who support this theory seem to be blissfully unaware of the reality of the energy market. Based on observed results I think that indirect market signals are going to lead to less cost-effective reductions in the time frame necessary for the aggressive reduction rules.  Finally, no supporters seem to understand the very real problems of implementation logistics.

4 thoughts on “Carbon Pricing: It Ain’t What It’s Cracked Up To Be”