Editor’s Note: There is no such thing as carbon free energy but politicians such as Joe Biden can’t grasp it and “green energy” advocates won’t even try.

Democratic Party presidential nominee Joe Biden’s “Clean Energy Standard” is a push to get what Biden and his running mate Senator Kamala Harris think are non-carbon sources onto the nation’s electricity system. While Biden’s plan considers existing nuclear and hydroelectric power as OK, the push is to remove the 63 percent of generation that comes from coal, oil, and natural gas by 2035—just 14 years from their entering office, if elected. But, what they do not tell you is that there is no such thing as 100 percent “carbon free” energy.  Their underlying assumption that this will somehow fix whatever climate change is occurring is just as off-base.

Studies have found that both wind and solar farms cause local climate change:

Forests and trees absorb carbon dioxide, but solar and wind farms are removing these areas as they need 100 times the land area of fossil fuel-generated electricity, and they need ten times as many minerals mined from the earth. They also require expansive transmission lines to deliver electricity from remote sites to high power demand centers, which also involve clearing land. Those long-distance power transfers add significant transmission losses and increased costs that wind and solar developers do not want to pay, causing increases in rates consumers must pay.

Further, massive material requirements are needed for wind and solar farms to replace fossil-fueled generating technologies and those materials are produced using hydrocarbons—coal, oil, and/or natural gas. For example, a single 100-megawatt natural gas-fired turbine about the size of a typical residential house would need at least 20 wind turbines, each about the size of the Washington Monument and covering about 10 square miles of land. The wind farm would consume about 30,000 tons of iron ore and 50,000 tons of concrete, as well as 900 tons of non-recyclable plastics for the blades. A solar plant with the same output would require half again more tonnage in cement, steel, and glass. And, those statistics do not address the issue of expensive and mineral intensive battery storage, which would be needed in a 100 percent renewable generating sector to save power from when the wind is blowing and the sun is shining for when those resources are not able to generate electricity.  And that is a lot of the time, since wind only operates at 34.8 percent of its stated capacity on average and solar only operates at 24.5 percent of its stated capacity on average.

The waste problem is also daunting. By 2050, it is estimated that the quantity of worn-out, non-recyclable solar panels will double the tonnage of today’s global plastic waste and there will be over 3 million tons per year of unrecyclable plastics from worn-out wind turbine blades.

The Cost of Transforming to Renewable Energy

The world spent $3,660 billion on climate change projects over the eight-year period from 2011 to 2018 of which 55 percent was spent on solar and wind energy—a total of $2,000 billion. Despite that investment, wind and solar produced just 3 percent of all the energy needed globally in 2019, while fossil fuels produced 84 percent. Since it cost the world $2 trillion to increase the share of energy generated by solar and wind from half a percent to three percent over an eight year period, imagine what it would cost to increase it to 100 percent and how long it would take. 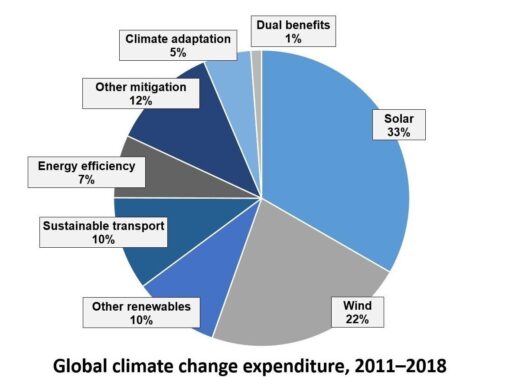 By 2050, Biden’s climate plan calls for the entire energy economy to be carbon free. That means no more internal combustion engine vehicles that run on gasoline and diesel.  Instead, they will be operated by the supposedly ‘carbon-free’ electricity discussed above. How he is going to manufacture carbon-free electric vehicles remains a mystery. Those electric vehicles have parts made from oil and natural gas including tires, belts, hoses, electrical wires, which are coated in plastic including battery wires, power steering fluid, brake fluid, antifreeze, coolant for air-conditioning, transmission fluid, and numerous plastics in the engine compartment. There are on average 1,000 parts made of plastic on the average electric vehicle.

Then there is the carbon fiber, fiber-glass, fenders, grills, windshield wipers, sealants around windows and undercarriage, side panels, and paint that are also produced from petroleum. Add to that the steering wheel, kick panels, air bag, dashboard, carpet, door handles, switches, most parts of the seat that aren’t leather, and center console—all needing hydrocarbons to produce.

Further, electric vehicles like gasoline vehicles have frames that are made from iron or aluminum—the latter produces lighter weight components to meet efficiency standards. The United States ranks eighth and ninth, respectively, in world iron and aluminum production. The leading iron ore producing countries are China, Australia, Brazil, India, and Russia, and the leading countries for aluminum production are China, India, Russia, Canada, and the United Arab Emirates. In most of these countries, there are fewer environmental regulations making their products cheaper than those manufactured in the United States. Energy is an incredibly important input of making such metals (as it is in the manufacturing of cement), and the vast majority of the energy consumed for their manufacture is currently from carbon-based fuels.

Batteries for electric vehicles are mainly made from lithium, nickel, cobalt, and aluminum. An electric vehicle battery weighs over 1,000 pounds compared to a standard 40 to 50 pound lead-acid battery found in most internal combustion vehicles. The United States is not a major producer of these metals. In fact, China dominates the production of battery components. About 60 percent of the world’s cobalt comes from Congo, of which China has principal interest.

Similarly, replacing just 50 million of the world’s estimated 1.3 billion cars with electric vehicles would require more than doubling the world’s annual production of cobalt, neodymium, and lithium, and using more than half the world’s current annual copper production.

California’s Governor Newsom has banned gasoline vehicles by 2035, which will cost California funding needed for roads and public works, including the state’s bullet train, since revenues are raised from fuel taxes.  The state currently collects about $8 billion in fuel taxes and $3 billion in cap-and trade revenues annually. Getting to 100 percent electric by 2035 in California will require massively more money for subsidies to pay for those vehicles and an enormous vehicle-charging network to expand from a 6.2 percent electric vehicle auto market to 100 percent. California’s problem in getting there will be a drop in the bucket compared to Biden’s radical energy/climate plans.

Biden and Harris see a carbon-free generating sector by 2035 and a carbon-free energy economy by 2050 and they will spend massive amounts to try to get there that will put Americans in energy poverty and the U.S. economy in third-world status. Removing hydrocarbons that have made the United States the world’s super power and the country energy independent is just silly when one understands the extent that coal, oil, and natural gas play in the U.S. economy, and indeed in the world economy.