Cabot Oil & Gas is, once again, investing in the future of Northeastern Pennsylvania with a $2.5 million gift to support Lackawanna College’s School of Petroleum and Natural Gas.

This isn’t the first major investment Cabot Oil & Gas has made in the region where it operates, but yesterday’s announcement of a $2.5 million gift to Lackawanna College to support its School of Petroleum and Natural Gas was just as important as the $2.2 million it contributed to building the new Endless Mountains Health System hospital in Montrose. The hospital is saving lives but the college is changing them forever. That was the message from Mark Volk, Lackawanna College’s President delivered with the announcement of the gift.

Volk described the partnership with Cabot Oil & Gas as a highly productive one that is “not only game-changing, but life-changing” for the students who participate in the program. How true that is, as you’ll see in just a moment.

The School of Petroleum and Natural Gas is located near New Milford, Pennsylvania and evolved out of a request by the Susquehanna County Commissioners for the College to establish a branch in their county. It as now been in operation five years and the Cabot Oil & Gas donation will take it to a new level.

The School happened because the Marcellus Shale industry was just getting rolling in the area at that time and Lackawanna College saw an opportunity to serve both Susquehanna County and industry needs at the same time. The College hired Rick Marquardt, a native of the region who had become part of the oil and gas industry, to set up and manage the School, which will have four degree programs and 140 students this Fall, expanding to 300 students with dormitory facilities in the next few years. My associate, Rachael Bunzey, profiled the facility yesterday in this post but here’s a video guaranteed to inspire and leave you with everything you need to know about the value of this Cabot Oil & Gas gift and the partnership with Lackawanna College.

The Future of Cabot Oil & Gas and Lackawanna College

The value of the Cabot Oil & Gas gift is articulated in these two paragraphs from the news release of its announcement:

“Lackawanna College saw an opportunity a few years ago and took a leap into education in support of the oil and natural gas industry,” explained Mark Volk, President of Lackawanna College. “Our partnership with Cabot enhances tremendously the ability of the School of Petroleum & Natural Gas to provide a world-class education designed to prepare a ready workforce that fits the needs of the multiple companies across the industry. Beyond just an investment in Lackawanna College, through this collaborative effort Cabot is making an investment in our students and our community.”

The gift will assist the School of Petroleum & Natural Gas in its goal to become a nationally recognized, first in class program in the field of petroleum and natural gas technology. Funds will be directed toward creating a $1 million endowment that will provide continuing support for student scholarships and help meet the long term needs of the school. An additional $1.5 million will be used for state-of-the-art equipment, training, staff and faculty development, and student interactive experiences and internships.

These words were strengthened by something Phil Stalnaker, Vice President of the North Region for Cabot, noted in his remarks at the announcement event. He noted Cabot Oil & Gas had roughly 200,000 acres under lease in the area, had identified 3,000 more potential well locations and was drilling 100 wells this year. Do the math and you have 30 more years of prosperity coming Susquehanna County’s way but that doesn’t even account for the potential from other formations or, more importantly, the additional manufacturing and other development coming due to the availability of inexpensive natural gas as a fuel source. That’s a future of family sustaining jobs, as Volk observed, rhetorically asking “Who could have ever imagined these wage levels for our area?”

He was talking about the fact Marcellus Shale core industry jobs which have, on average, paid roughly $35,000 more per year in wages and salaries than other industries, The latest figure from the Pennsylvania Department of Labor and Industry, in fact, is $40,800 higher. Among ancillary industry jobs, there is a $17,100 differential. See for yourself: 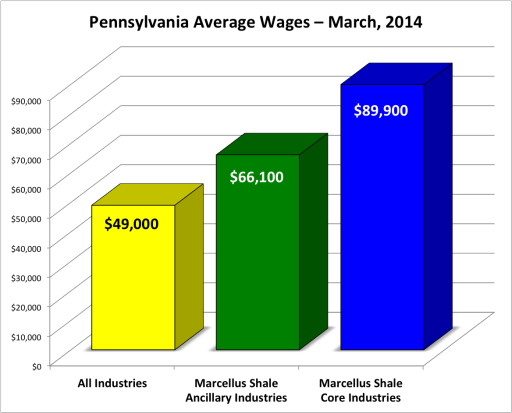 Life-changing? You’d better believe it and the Cabot Oil & Gas gift will help provide local students with the skills they need to participate. That’s what’s this is all about from a community perspective. Cabot is doing it because it makes economic sense for them to train local workers the way they want them trained. Lackawanna College is doing it because it gives them a way to be useful to the region and enhance their own position. The biggest beneficiaries, though, are neither of this entities, but, rather, the individuals looking for decent opportunities in an economy that had not produced a lot of them for the region in the years before we heard the words “Marcellus Shale.” 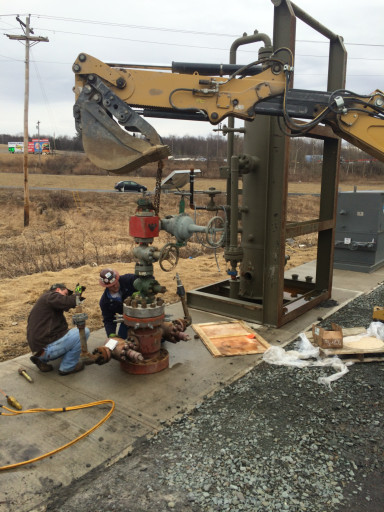 There is also another group of beneficiaries; the mothers and fathers of the young people who are enrolling in this program and being trained for careers that will keep them close to home and extended families intact, with opportunities to see grandchildren on a regular basis. This is the fundamental basis of our rural culture and as David Spigelmyer, President of the Marcellus Shale Coalition, stated yesterday, not having our children have to leave home for decent jobs is the essence of what the Marcellus Shale revolution is all about. Should they want to leave to see the world they can–they’ll have the skills–but they can came back. That’s the life-changing part.

That’s why I love working with the natural gas industry. It is the one industry with the ability to revive the rural America I and so many others love. That’s what the Cabot Oil & Gas gift to Lackawanna College means to us.

P.S. Hats off to Bill desRosiers at Cabot Oil & Gas, who played a big role in making this donation happen. A native of Highland Mills, NY where his family operates a quarry, Bill is graduate of Misericordia University in Dallas, PA, and Energy In Depth, where we worked together. He is a great example of the kind of opportunities the Cabot gift will create for others down the road.