Cabot has once again shown its commitment to the local community by donating nearly $45,000 in safety equipment to fire companies in Susquehanna County.

Seventeen fire companies in Susquehanna County were the recipients of a variety of safety equipment from Cabot Oil & Gas Corporation last week. Over the course of April 25 and 26, nearly $45,000 worth of equipment procured by Taylor Rental/BX3 Supply was warmly received by fire company representatives. Cabot officials also invited the firefighters to make arrangements at their convenience to visit gas pads and other sites to acquaint themselves with new technologies and potential concerns. 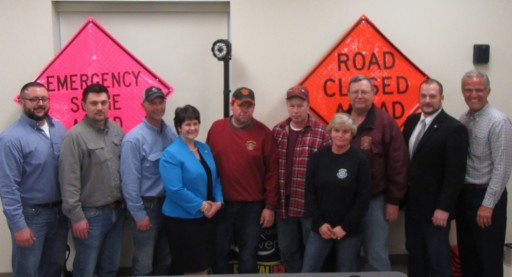 Regardless of size, all companies regarded by Cabot to be primary or secondary responders received the same items, which included a portable scene light, traffic signs, road flares, spill kits, road cones, danger tape, and a hand-held meter the likes of which gas workers take onto sites to detect levels of four potentially explosive gases. Cabot well operator and Springville Fire Company chief B.J. Thorne helped to determine the common needs among the fire companies as they pertain to situations at gas sites that might be encountered.

“They are all items that we can use. Especially the road signs,” said Hop Bottom fire chief Pete Mecca. Like Thorne, Mecca can see both sides of the coin, having worked for five years in the gas industry.

Silver Lake Fire Company chief Joe Tims was also pleased with the gifts, noting that his company’s road cones had recently been stolen. First assistant, Carolyn Finch, was excited about the scene light because it is more compact than the one the company currently uses. Tims noted that his company has always enjoyed a good relationship with Cabot. 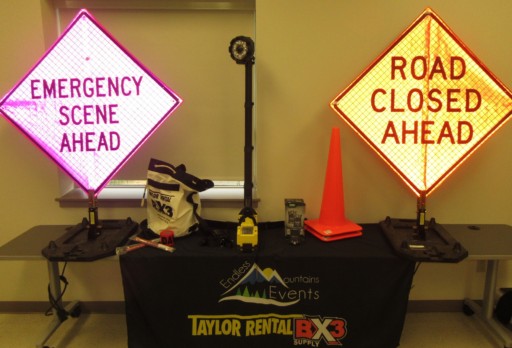 In addition to the apparatus and a catered meal, the guests received updates from industry experts and accolades from elected officials. Brody Webster, manager of Cabot’s safety and environment department in Susquehanna County, noted that there a number of new safety features in place at gas sites and on CNG-powered vehicles. Susquehanna County commissioner Betsy Arnold and state representatives Jonathan Fritz called the firefighters “living saints.”

“Tonight, our words and actions are just a small token of our appreciation,” Fritz remarked.

Arnold indicated that she would like to take part in a tour, and GasSearch Drilling Services employee and Montrose Fire Company chief Preston Sprout recommended that everyone get a close up look at a drilling and a hydraulic fracturing site.

Cabot’s environmental health and safety specialist Steve Watson also encouraged tours, even for those who have already been on production sites. When responding to an injury call, he noted as an example, “It can be intimidating to get up on one of these sites and not know where to go. We’re here to help you get to these people and do what you do best.” 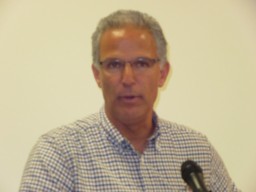 “We’re extremely comfortable with what we do,” added George Stark, Cabot’s director of external affairs, “but we want to carry that confidence over to you.” The biggest change at gas pads, he related, is “the size of wells that rival anything in the United States.” The equipment is bigger, Stark explained, because of the enormous amounts of natural gas being extracted.

Webster explained that the recent donation is possible due an upturn in the industry after a noticeable lull, during which the company was unable to make such contributions. “We’re in a position once again to support first responders, and we’re excited to do so,” he stated.

Not only are corporate officials glad to be able to renew their material assistance to the fire companies, Stark deemed the giveaway events as a means of reasserting Cabot’s desire to maintain close ties with firefighters and other first responders.

“It’s critical for us to have this opportunity to share this with you,” said Stark. “We need your feedback and to have your partnership.” 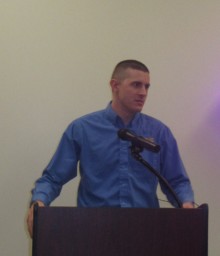 Taylor Rental vice president Phil McKeon carried the theme of cooperation a step further, noting that the buildup of the BX3 Supply division was made possible by the gas and pipeline companies and the management of Taylor Rental wants to “pay it forward” by extending all the help to first responders that they need, including warehouse space for excess stock.

“Like you, we are a 24-hour operation. We are heavily vested in the local community and want you to know that we are there for you,” McKeon maintained. The company has employees within 10 minutes of its buildings in both Susquehanna and Wyoming counties, where additional light towers, spill mats, and even excavators can quickly be made available to firefighters. Taylor Rental donated the spill kits and road flares that were part of the gift packages.

Looking to the future, Cabot external affairs coordinator Bill desRosiers noted that the company is working with the Susquehanna River Basin Commission to allow fire companies access to its water withdrawal sites for quick refills of their tankers. Cabot will also provide the necessary training when the initiative is approved.

On April 26, Cabot conducted a similar reception for firefighters from the eastern half of the county at the Harford Volunteer Fire Company.