The Utica Shale Appalachian Basin Exploration Consortium highlights the current business development opportunities that arise across the breadth of the Utica Shale fairway.

The oil and gas resources underlying the Marcellus from within the “Utica Shale” play have become better defined through the shale resource exploration and recovery operations of various exploration and production (E&P) companies. The geographic alignment is unique and now is better defined; offering opportunities for business development that aligns with the geography of the fairway.

Additionally, boundaries such as the “Line of Death” for economic quantities of oil and gas within the play have been better delineated. 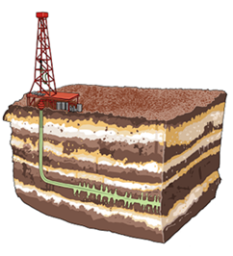 The “tiramisu model” of horizontal drilling in shale.

More recent test drilling within the Appalachian Basin below the Marcellus (Devonian Period), in stratigraphy generally known as the “Utica” (Ordovician Period), there has been a resurgence of activity as this carbon-rich play has yielded unexpected, very positive results.

Utica Is Bigger Than Many Thought

The Utica Shale play could hold far more oil and gas than previously estimated, the US Department of Energy’s Fossil Energy Office (FOE) said this week (10/15/2015). If the play’s commercial potential could be realized, it could be, geographically, the nation’s largest gas field.

The Appalachian Oil and Natural Gas Research Consortium has led the way recently in definition of the resource play called the Utica Shale. They describe the play as neither “Utica” nor “shale” as it focuses on both the Utica and the Upper Point Pleasant formations; as interbedded limestone and organic-rich shale. Further, West Virginia University (WVU) is committed to expanding education, research and outreach on technical aspects of shale gas development and has a focus on innovations in system-wide control using operational and economic data to allow companies to be profitable in a competitive market.

This appears to be the first consortium to consider research on economically recoverable oil and gas from the play which would publish reports on their findings.

The “play book” incorporates and integrates results of research conducted at various granularities, ranging from basin-scale stratigraphy and architecture to the creation of nanoporosity as gas was generated from organic matter in the reservoir. Between these two end members, the research team has mapped the thickness and distribution of the Utica and Point Pleasant formations using well logs; determined favorable reservoir facies through an examination of outcrops, cores and samples at the macroscopic and microscopic scales; identified the source of the total organic carbon (TOC) component in the shales and estimated the maturation level of the TOC; and searched for reservoir porosity utilizing scanning electron microscopy (SEM) technology.

However, it also included an examination of the upper Trenton time-equivalent Point Pleasant Formation that was deposited in a shallow depocenter located between the Trenton Platform to the north, extending from what is now Indiana to New York, and the Lexington Platform to the south, in what is now Kentucky, southwestern West Virginia and western Virginia.

Doing Business in the Utica Shale

Business development opportunities within the upstream, mid-stream and downstream supply chain exist over nearly the entire Utica Shale play, with the exception of the “immature” and the “over mature” regions found on the western and eastern boundaries, respectively.

The “north south” alignment of the oil-, wet gas-, and dry gas- fields offer unique business development opportunities in each of the up-, mid- and down-stream business markets.

Some unique opportunities could include:

The figure below shows the Conodont alteration is likely to hold for quite some time. 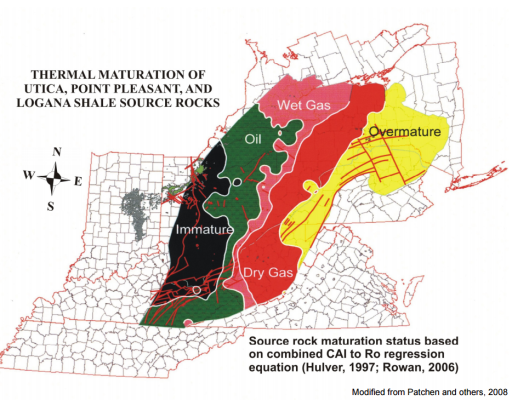 The forces which created the coal seams that are abundant on the eastern region have “baked out” the free oil and gas.

Geologists and gas companies know the area directly around the Lackawanna Syncline (the banana-shaped formation that runs through Luzerne and Lackawanna counties), where the bulk of the region’s famous anthracite is found, is likely to be unproductive because the high temperatures and pressure that hardened the coal also drove the gas out of the carbon-rich shale.

Additionally, the under-maturation of the formation on the western front limits development to mid-Ohio. New York boundaries are constrained by the “fracking moratorium”, while southern boundaries are delineated by the Appalachian mountain range.

Near the end of Trenton time, while relatively clean carbonates were being deposited on the platforms, a mixture of clastic muds and carbonates was being deposited in the intra-platform basin, creating the Logana Shale Member of the Lexington/Trenton Formation, and the younger Point Pleasant Formation above the Lexington/Trenton, which was succeeded by deposition of the darker, but not necessarily more organic-rich Utica Shale.

An in-depth study in Eastern Ohio and Western Pennsylvania found the following (from abstract):

Previous studies of outcrop data from the Cincinnati arch and Jessamine dome recognized a number of Late Mohawkian to Early Cincinnatian third-order sequences deposited in an active foreland basin during onset of the Taconic orogeny. Sequences consist of deepening upward successions of transgressive limestone and shale, recording a period of sustained subsidence and increasing sea-level along the eastern margin of North America.

Chronostratigraphic surfaces demonstrate that basinal interbedded lime mudstone, shale, and marl facies of the Logana and Point Pleasant formations are contemporaneous and genetically related to platform limestone on the flanking Trenton and Lexington platforms. Isopach thickness maps of composite sequences indicate significant accumulation of carbonate sediment and build-up of the platforms during the Late Mohawkian, followed by increased clastic sedimentation and basin fill in the cross-strike Sebree trough and Point Pleasant subbasin during the Early Cincinnatian.” 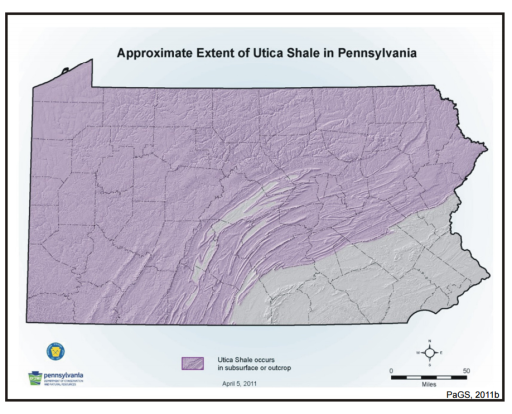 Utica underlies most counties in PA, except Southeastern Pennsylvania (SEPA) 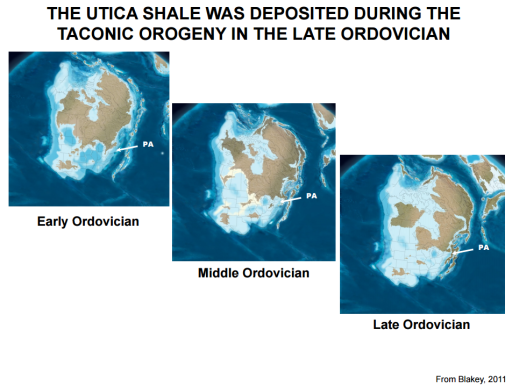 Utica falls in the Late Ordovician that covers the time between 485 and 444 million years ago. 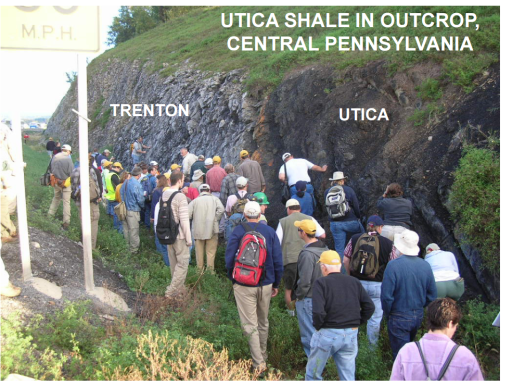 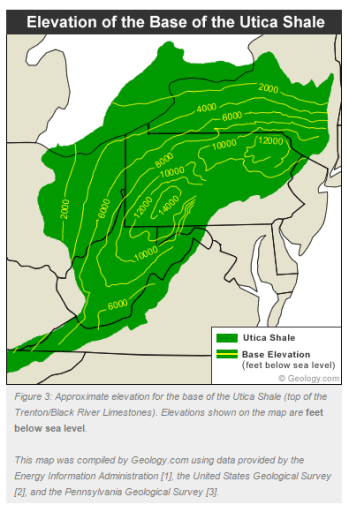 Elevation to the base of the Utica shows deepest are found easterly, while shallowest are northwesterly. 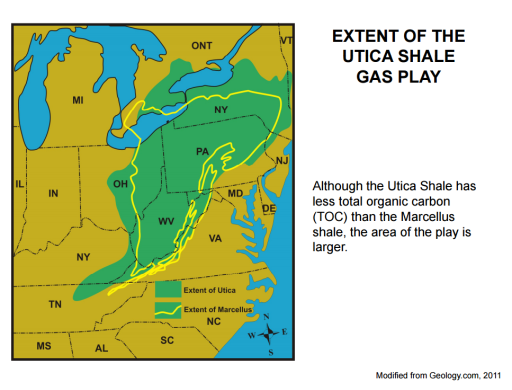 Thickness of the Utica

The thickness of the Utica Shale is variable. Throughout most of its extent, it ranges in thickness from less than 100 feet to over 500 feet. Thickest areas are on the eastern side of its extent, and it generally thins to the northwest. A thickness map of the Utica Shale is shown as Figure 6 in the right column of this page. Although thickness of a rock unit is important in determining its oil and gas potential, the organic content, thermal maturity and other characteristics must all be favorable. 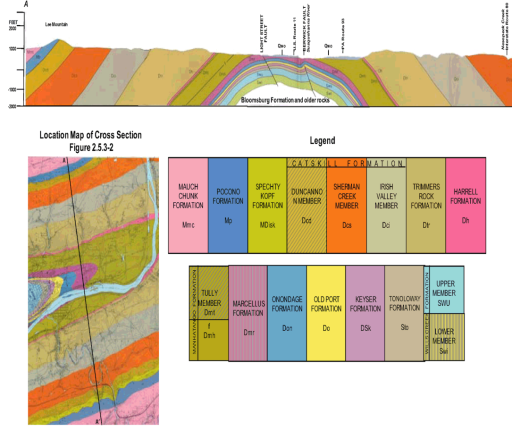 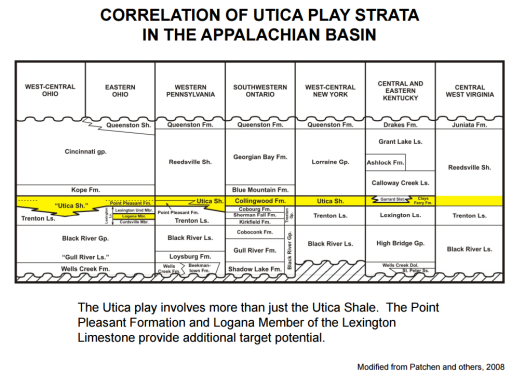 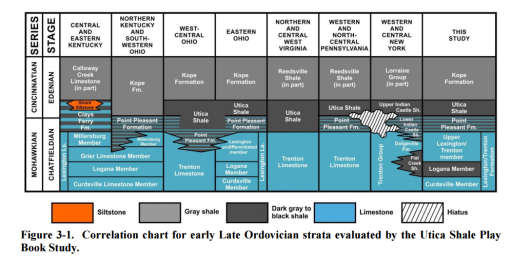 The Utica formation has a fairly uniform name throughout, but in New York State is called the Upper Indian Castle Shale. 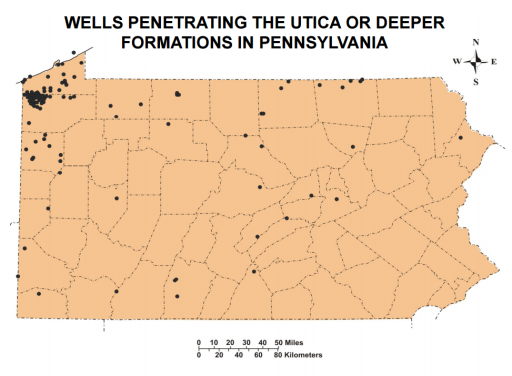 Generally, few Utica targeted wells are drilled in the southeastern area of Pennsylvania 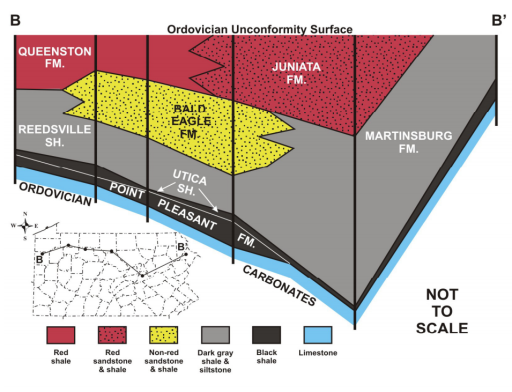 Left to right, the Utica sits atop the Limestone carbonates of the Ordovician 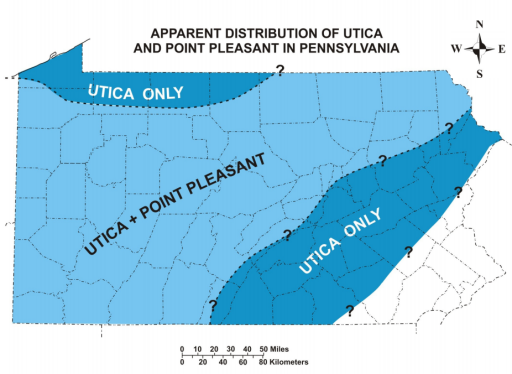 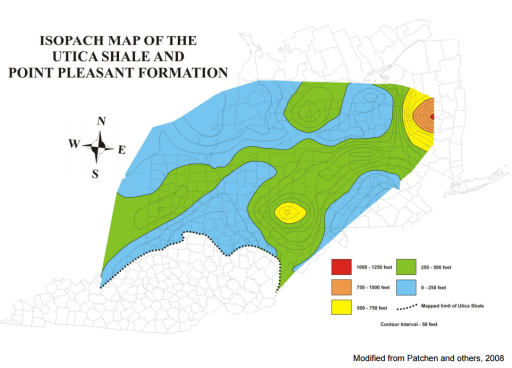 An isopach map illustrates thickness variations within a tabular unit, layer or stratum. Isopachs are contour lines of equal thickness over an area. The Utica and Point Pleasant are about 0-500 feet thick on the southeastern edge (blue and green) 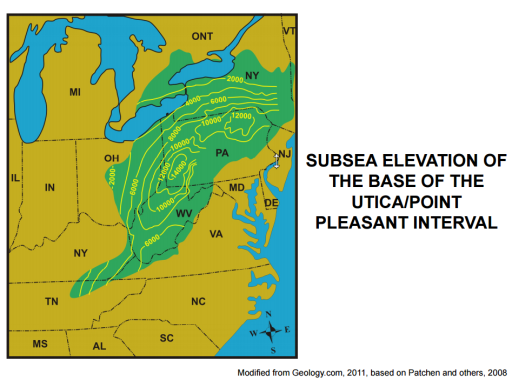 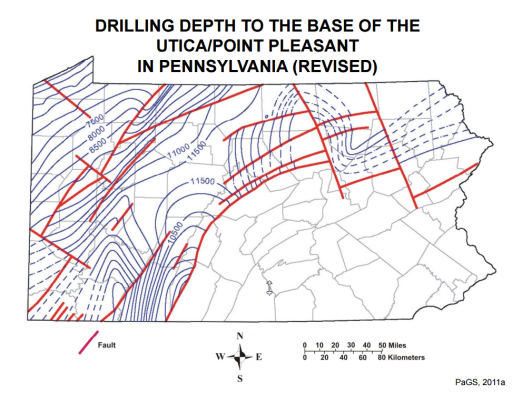 Depth to base is approximately 7,000 feet of drilling depth in Luzern County 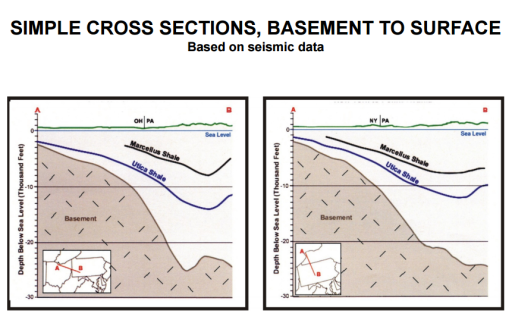 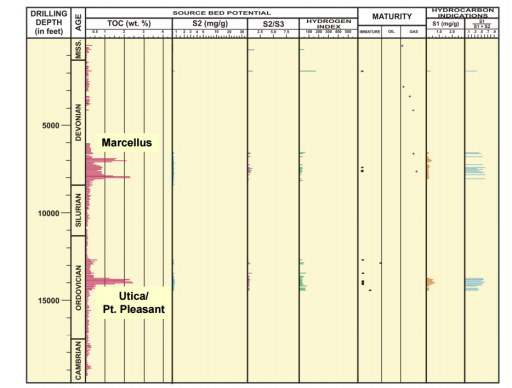 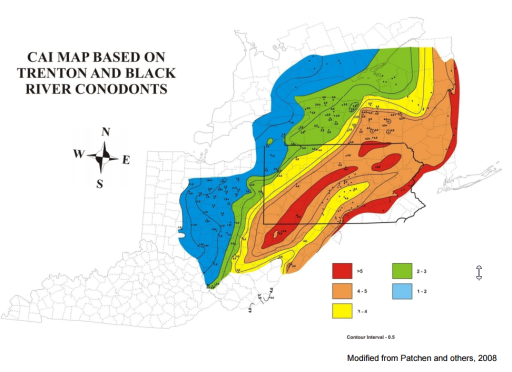 Conodont elements are used as paleo-thermometers, a proxy for thermal alteration in the host rock, because under higher temperatures, the phosphate undergoes predictable and permanent color changes, measured with the conodont alteration index. This has made them useful for petroleum exploration where they are known, in rocks dating from the Cambrian to the Late Triassic.

The Conodont Alteration Index (CAI) is used to estimate the maximum temperature reached by a sedimentary rock using thermal alteration of conodont fossils. Conodonts in fossiliferous carbonates are prepared by dissolving the matrix with acid, since the conodonts are composed of apatite and thus do not dissolve. The fossils are then compared to the index under a microscope.

The Conodont Alteration Index (CAI) ranges from 1 to 6, as follows: 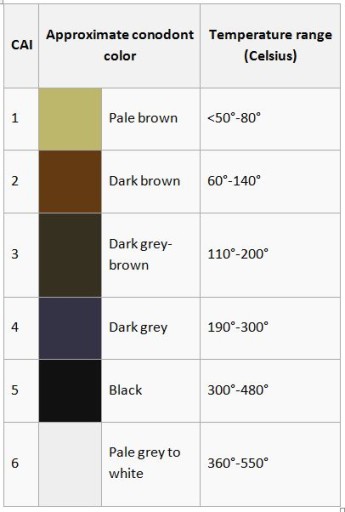 The CAI is commonly used by paleontologists due to its ease of measurement and the abundance of Conodonta throughout marine carbonates of the Paleozoic. However, the organism disappears from the fossil record after the Triassic period, so the CAI is not available to analyze rocks younger than 200 million years. Additionally, the index can be positively skewed in regions of hydrothermal alteration. 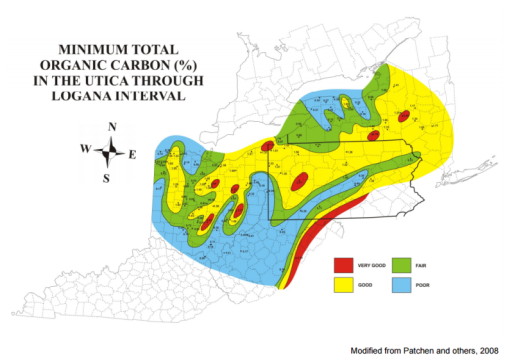 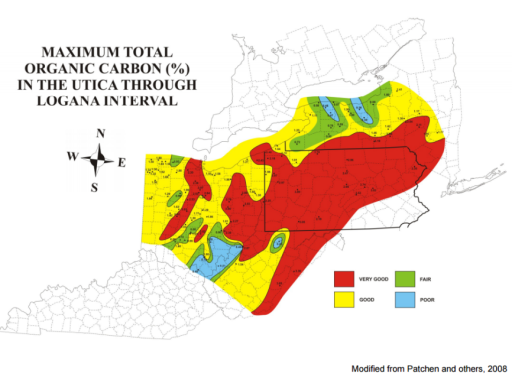 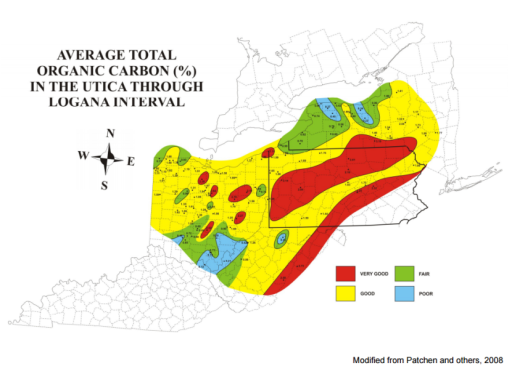 All the Marcellus wells have been plugged and abandoned on the south-eastern edge. 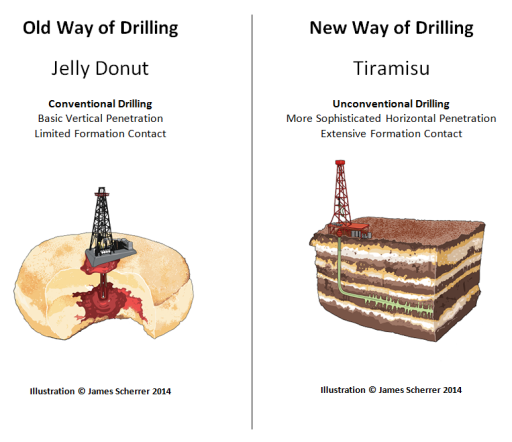 Illustration of the technology being used as a means of educating the public in reference to horizontal drilling in shale fields.