There is a bright future ahead for Marcellus Shale gas according to the experts delivering a 2015 Energy Economic Forecast is Scranton on Thursday.

America’s Natural Gas Alliance (ANGA), Lackawanna College, Marcellus Shale Coalition, the Greater Scranton Chamber of Commerce, UGI Energy Services and UGI Utilities combined forces Thursday to deliver a 2015 Energy Economic Forecast for the Marcellus Shale gas region, focusing on Northeastern Pennsylvania. It took place at the Four Points Sheraton in Scranton and was a fact-filled two and one-half hours of discussion on natural gas supplies, production, consumption, infrastructure and much more, with 230 or so business representatives from all walks of commerce attending.

The 2015 Energy Economic Forecast was a candid examination of what’s happening in the industry as it impacts the Northeast and illustrated what a bright future this sustainable industry offers going forward. The data presented was just overwhelming, in fact. Consider the following:

Paul Hartman, Regional Director of ANGA gave an excellent presentation that set the stage for the others, documenting the growth in natural gas production and highlighting the best opportunities to take advantage of it going forward. The Marcellus Shale region is the nations’s largest producer of natural gas and can be produced and sold for less than the rest (Leidy price) . This creates a challenge for some operators, but for those leading the way in innovations that reduce the costs of production, it opens opportunities to capture new business (as with all commodity businesses): 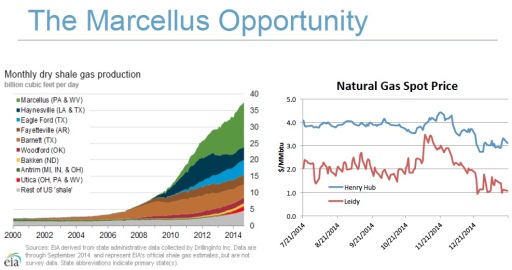 Moreover, while production is arguably much higher than necessary now, producing those low prices, the market is expected to respond in reaction and this will help restore a new balance: 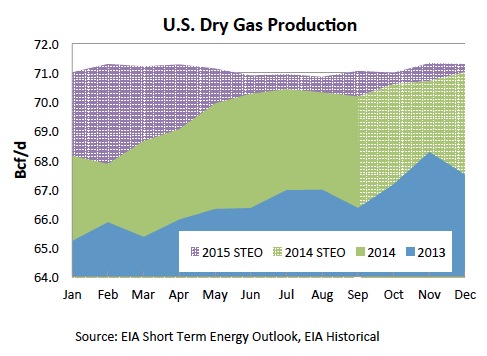 Meanwhile, there are new opportunities being created daily. New industrial projects are taking place across the country as cheap Marcellus Shale gas makes them possible and these projects will use more gas. We are also producing ever greater quantities of natural gas liquids that allow us to manufacture things such as ethylene from them (used for everything from ripening bananas to making brake fluid). We have a huge competitive edge in selling them: 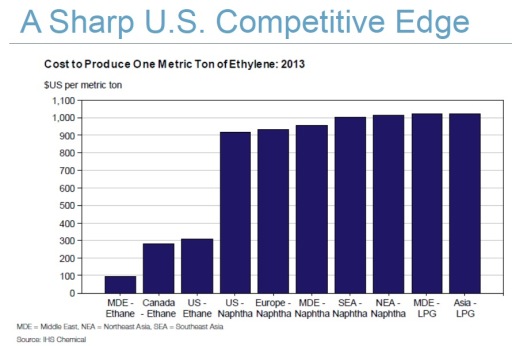 This means, going forward, we’re going to be doing a lot more in exports. After decades of the US falling behind and having to import things, we are developing real export markets that will bring foreign dollars here instead of us shipping ours overseas. The outlook has completed shifted: 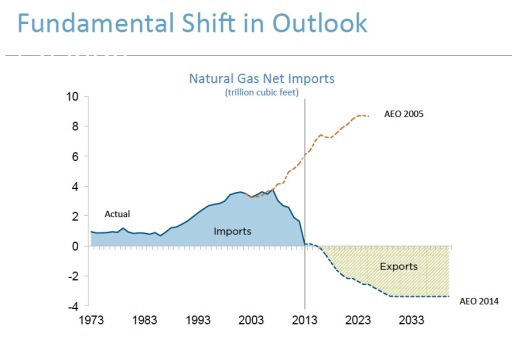 John Augustine, Community Outreach Director, with the Marcellus Shale Coalition presented some amazing data on the economic impact of Marcellus Shale gas development, including sources of production by county, for example, where Susquehanna County is the unquestionable star today.  Susquehanna County, for those of you from the Upper West Side who think there’s no life on the other side of the Hudson, that’s Dimock and environs, meaning your tiny $1.5 million apartment is most likely heated by gas from there. 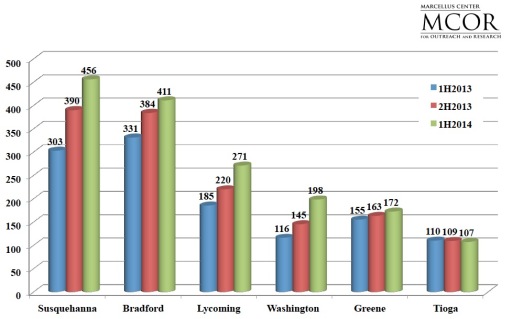 The Upper West Side and Susquehanna County aren’t the only place to benefit, though. Marcellus Shale gas companies have paid billions in taxes and impact fees as well as road improvements: 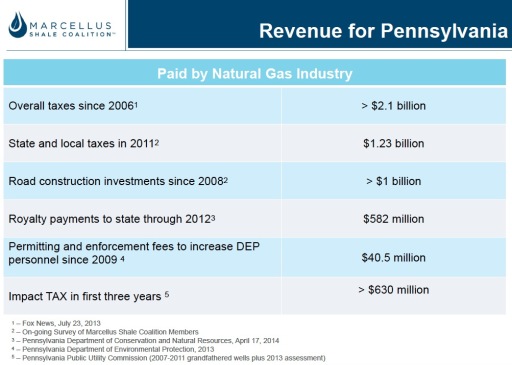 Meanwhile, consumers everywhere throughout the Northeast are benefitting as the following two charts vividly demonstrate, and new power plants promise more savings, especially as plants are retired and replaced: 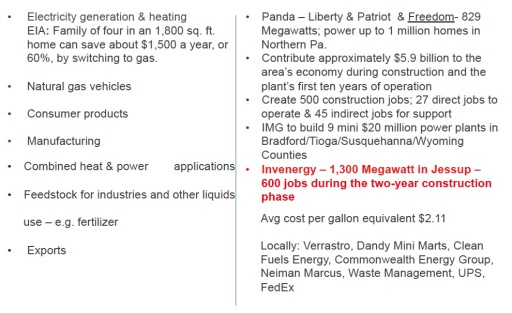 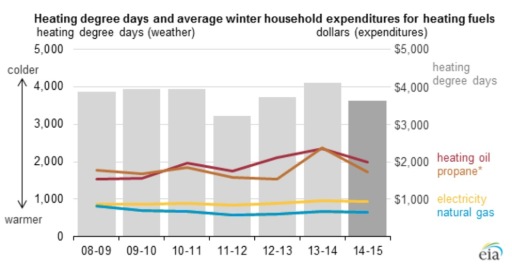 The costs of production and the savings result from technological improvements that have cut drilling time to less than a third, while tripling the reach of laterals, and reduced the actual fracking process to a blip on the screen, like the engine tune-up on your car. 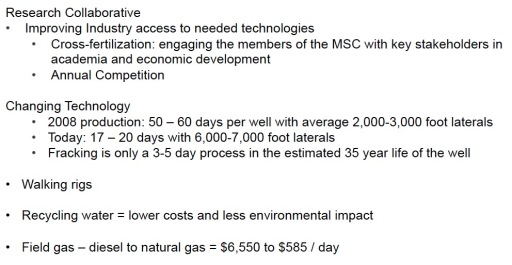 Pipelines to Move Marcellus Shale Gas Are Critical to Northeast

Allen Coleman of UGI Energy Services also spoke about midstream projects and their importance to the future of the industry and the economies of the Northeast. He emphasized how their Auburn and Uniondale projects had served to collect Marcellus Shale gas and deliver it to regional consumers (the orange dots represent producing wells): 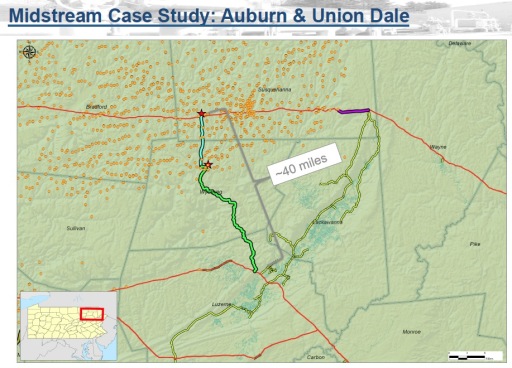 Coleman also explained the role of the PennEast pipeline, which deliver Marcellus Shale gas to consumers and businesses benefitting by it in New Jersey. Yes, the Jersey boys need gas, too, and, despite the insane objections of the Delaware Riverkeeper, dirty tricks specialist for the William Penn Foundation and the Rockefeller gang, this project will produce much needed gas to the metro area and ensure its ability to prosper. The savings delivered to metro consumers, in fact, have given New Jersey taxpayers a break they seldom, if ever, get from their bloated government. 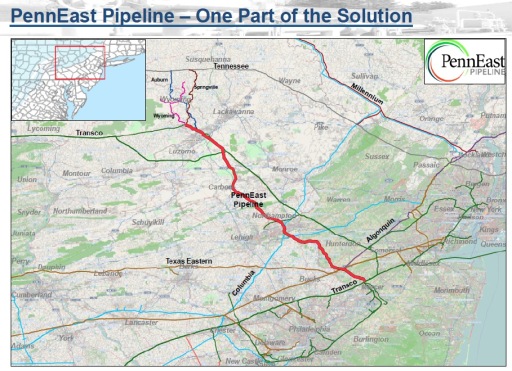 Coleman also noted the importance of their’s and other pipeline projects to moving Marcellus Shale gas to market. There has been a lag in the ability to do so but several new projects are increasing the take-way capacity and hold the promise of building new demand and supply relationships between the Marcellus Shale gas region and consumers across the metropolitan Northeast, from Philadelphia to New York to Boston. 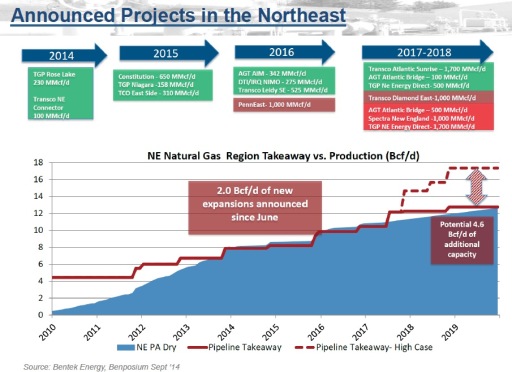 Finally, Dan Adamo, Director of Marketing Programs and Strategy for UGI Utilities, addressed just how Marcellus Shale Gas is translating into savings for its consumers in particular. His statistics speak for themselves and need no explanation: 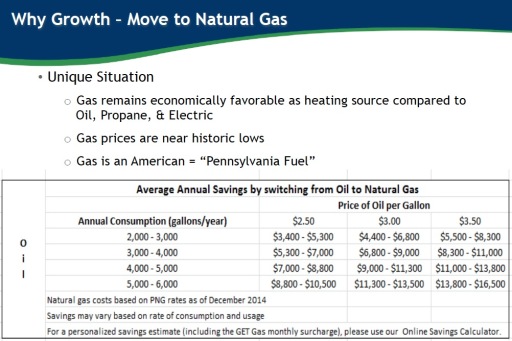 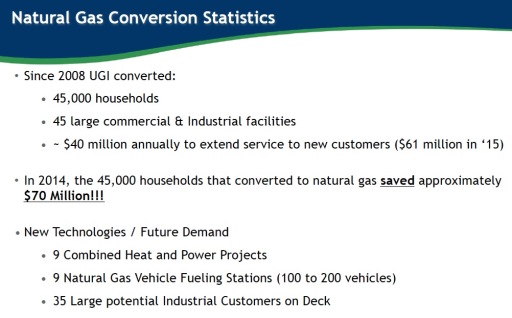 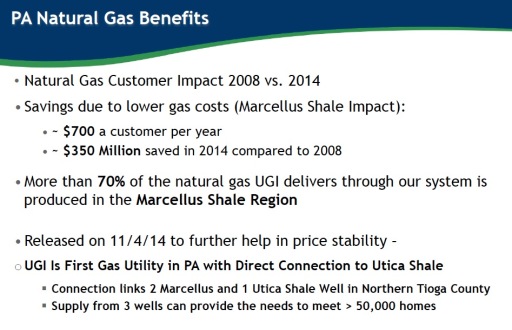 This data, as moderator George Stark of Cabot Oil & Gas explained, demonstrates the sustainability of natural gas development in the Northeast. We are not only producing Marcellus Shale gas locally, but we’re consuming it locally and using local hires to make it all happen. We’re rebuilding an economy, in other words, and as we do so we have the opportunity to become the engine of economic redevelopment for the greeter Northeast as a whole. Nothing could be better.

8 thoughts on “The Bright Future of Marcellus Shale Gas”