Bradford County just announced its proposed budget for 2015 and it demonstrates, yet again, the economic contributions of shale gas to property tax stability.

Sometimes it’s what doesn’t happen that makes all the difference. Non-events can change lives as easily as the big splashes that tend to get our attention. Such is the case with property taxes in one Pennsylvania county that just happens to be a leader in shale gas development – Bradford County.

Consider this succession of news bits from Bradford County, Pennsylvania, one of the Commonwealth’s star performers in terms of Marcellus Shale production:

December 4, 2009 – “The Bradford County Commissioners on Thursday unveiled their proposed $56.2 million budget for 2010, which includes no change in the county’s property tax.”

December 21, 2012 – “The Bradford County commissioners on Thursday passed a $61.2 million county budget for 2013 which includes a 5.9 percent decrease in the county property tax rate. The millions of dollars in annual revenue that the county has started to receive from the impact fee on gas drilling companies is allowing the county to reduce its property tax rate, county officials said.”

November 13, 2013 – “The Bradford County commissioners announced Thursday that the proposed $63.8 million Bradford County budget for 2014 leaves the county property tax rate unchanged, gives a 3 percent cost-of-living increase to most county employees, and keeps the county’s programs and services the same.”

October 24, 2014 – “The Bradford County commissioners on Thursday announced that there will be no tax increase in the county’s 2015 budget..and the cost of natural gas, which the county uses to heat all its buildings, is much less than it had been in the past.”

For those of you not counting, that’s six years with no tax increase and one tax decrease. How many counties outside the Marcellus Shale region can claim that kind of success?

Well, there are other success stories, of course. The Allegheny County, Pennsylvania budget for 2015, for example, also avoids a tax increase. The reason is this:

The budget factors in revenue from drilling for natural gas under Deer Lakes Park including an anticipated $4.7 million bonus payment from Range Resources. Mr. Fitzgerald said he anticipates that funding to be in county coffers by the end of the year.

Of that bonus payment, $2 million will go toward upgrades to Deer Lakes Park, with the remaining toward the fund balance. A $3 million parks improvement fund from Range will be divided among the county’s nine parks.

There are others as well, but the role of gas drilling in keeping taxes low is fairly obvious isn’t it? Whether it’s impact fees, lease bonus and royalty payments or the reduced costs of heating county buildings, natural gas is bringing stability to county budgets. 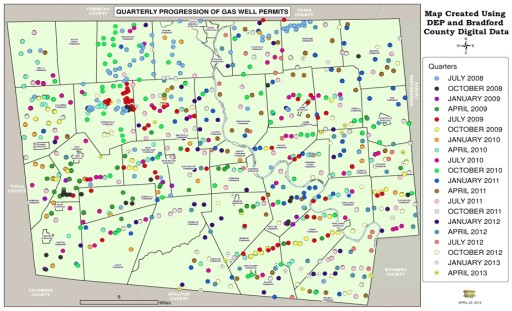 These are the sorts of things that don’t get attention every day but they’re critically important to taxpayers and a reminder that trying to rob the industry with a severance tax that would only shift revenue from shale region counties to others makes little sense unless your one of those other counties and determined to avoid tough choices about things like public pensions or prefer tax and spend policies.