The entertainment value of fractivism, as we often note, is high and it would all be worth the time invested were it not for the fact some take it seriously.

We’re forever discovering new depths to the absurdity that is fractivism. It is, like so many radical enterprises, consumed by a self-absorption that is all encompassing, which is why it is such a serious matter to the fractivists even as they do decidedly unserious things. They are, for the most part, humorless folks who truly believe the world will not survive without their contributions and are determined to make us all see it their way or, at least, appreciate their martyrdoms. Fractivism, though, is just one bad example after another of how to make your own life miserable while entertaining the rest of us.

Let’s consider, for instance, the “Blued Trees” promoted by this video:

You need to watch this video if you can tolerate the morose music and the accompanying condescension for what I promise is less than five minutes. It’s all about painting trees blue to create a “work of art” that can be copyrighted for purposes of contesting the expansion of the Spectra Energy Algonquin Incremental Market pipeline. It will, supposedly, create a “Greek chorus” that will force a battle over the “moral rights of arts.”

Somehow, I suspect protecting trees painted with a “non-toxic blue slurry” and set to bad music is not going to trump New York City’s need for more natural gas, but I could be wrong. This is New York, after all, and logic never beats political correctness there, but one can just imagine the legal wrangling over the rights of trees, art and people. Will the trees get questioned in the depositions? Who has the right to speak for them? Is the new “green” blue? What do the trees think about that? 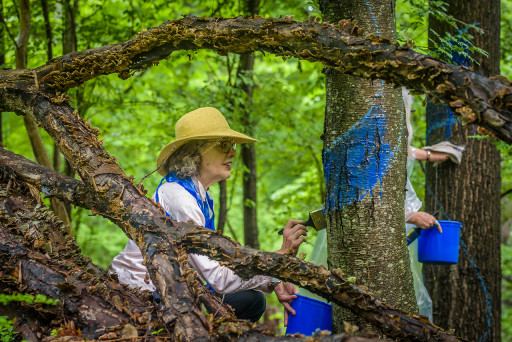 Think I’m being bizarre? Read the explanations of Aviva Rahmani, the “ecological artist” who dreamed this one up and judge for yourself. She apparently has or is about to receive a PhD and her doctoral dissertation was on “Trigger Point Theory as Aesthetic Activism,” which one suspects was fancy wording for how to make a scene and attract attention.

Like so many of the trust-funder types in fractivism, Rahmani apparently comes from a “family of developers,” and had the luxury of becoming a serial protester dating back to the Vietnam war and leading up to the “Blued Trees” project, which, by the way you can help support here (they clearly need the dough).

Such is the case with most of fractivism. It is a fringe cause that attracts aging trust-funders and young minds of mush and few people of substance.