Journalism has died in this country as supposed newspapers and media outlets of record have joined the ranks of advocates and dropped any pretense of fair and accurate reporting. There is no more separation between editorial office and reporting. It’s all one big attempt to shape public opinion with warring ideological viewpoints and most of the media being on one side. Newspapers are entitled to opinions, of course, and wouldn’t exist in most cases  but for a desire to offer a particular side of any issue. It’s American as could be.

Today, though, much of the media views itself as part and parcel of the activist community; dedicated to being mouthpieces for politically correct special interest causes. They’ve crossed the line from being fair-minded reporters with views of their own they express on the editorial page to being full-time propagandists for one set of views in everything they do. The Binghamton Press & Sun Bulletin offers a perfect example with their recent collection of hit pieces on Crestwoood’s proposed propane (LPG) and gas storage facilities in Watkins Glen. Worse, they relied upon Tom Wilber, who is all but an anti-shale activist to do their reporting.

The whole wretched story of what the Binghamton Press did in this instance is told by Jim Willis over at Marcellus Drilling News, which is a must-read source for anyone seriously interested in natural gas issues (available for a very low subscription fee). He nicely lays out every aspect of the LPG attack by the Binghamton Press. There are a couple of additional points to be made though, some of which were brought to our attention by an alert reader of this blog.

Let’s start with the sources used by the Binghamton Press. Among them is Lou Damiani, the owner of a winery on the east side of Seneca Lake. For those who don’t know, that’s the opposite side of the lake from where Crestwood wants to LPG storage and has done gas storage for decades. Here’s what Tom Wilber doesn’t tell his reader; Lou Damiani, like most other Finger Lakes wineries, uses propane in his his business. Here’s his propane tank: 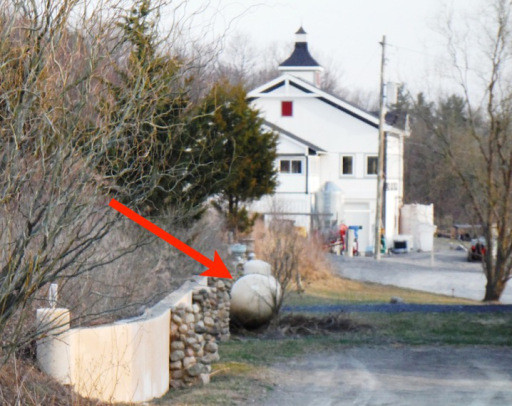 Does anyone suppose the use by Damiani of propane in his own business wasn’t a relevant fact? Isn’t it obvious Wilber should have at least asked Damiani about it? Asked him to explain why some wineries are opposed to propane storage when they use so much of the stuff and why some wineries have refused to get on the bandwagon? Is that kind of objectivity too much to ask?

Wilber also includes a picture of Yvonne Taylor in his report and quotes Joe Campbell as well, but Campbell and Taylor also equipped their new home on the east of Seneca Lake with propane, as this photo demonstrates: 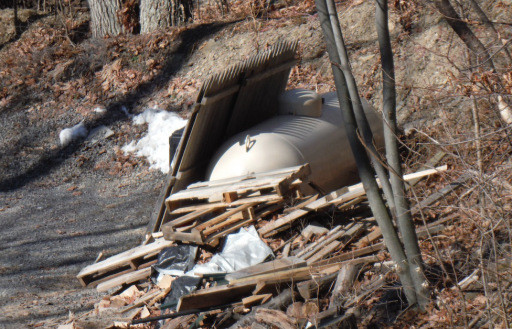 Was that not also relevant to anyone wanting the full story?

It isn’t just the sources that are a problem with this collection of stories, though. There’s also this claim:

Salinity in the lake, which provides drinking water to more than 100,000 people, exceeds levels that are safe for people on sodium-restricted diets. The rise in salinity corresponds with the history of solution mining and gas storage on the southwest end of the lake.

This reminded one of our readers of something and he wrote to offer the following:

Mr. Wilber claims that the “chloride in Seneca Lake comes from the salt mines, however there is a little known existing 10,000 acre toxic waste site on the shores of Seneca Lake.
Information the EPA super fund site shows tons of clorides (salts) are still present at the site and tons have been taken into Seneca Lake by four creeks that empty into it. Please also notice in the EPA report that the state plans to use the land as recreation after they cover it with just nine inches of soil. New York State’s Health Commissioner, Mr. Zucker, didn’t want his non-existent children playing near a hydraulic fracturing site where the real activity takes place thousands of feet underground but seems just fine with letting our kids play on top of one of the largest toxic wastes sites, with just nine inches of soil as protection.

The Seneca lake site is Polluted with multiple “chlorides” which are made from salts.
It is polluted with thousands of tons of these chlorides both dumped onto the ground  and burnt in pits at the site over a long period, polluting a huge area of ground and water,
This site has  four creeks running from this Toxic Super Fund site  into Seneca lake and two into Cayuga Lake. “The groundwater is contaminated with volatile organic compounds (VOCs) including trichloroethylene (TCE), 1,2-Dichloroethene, vinyl chloride, and metals. Soils are contaminated with heavy metals, VOCs and SVOCs.”
One listed pollutant present at the Seneca site is “Vinyl Chloride”  used in the manufacture of PVC. “The basic raw materials for PVC are derived from salt and oil. Chlorine is manufactured by the electrolysis of sodium chloride, salt. This is why the first PVC manufacturing plants were located close to natural sources of salt.”
Another listed pollutant present at the Seneca site is “trichloroethylene,” used in the manufacture of PVC and its use creates “Chloride”  as a byproduct. “The major use of 1,2-dichloroethane is in the production of vinyl chloride monomer (VCM, chloroethene) with hydrogen chloride as a byproduct. VCM is the precursor to polyvinyl chloride.”

Our readers also noted many other issues connected with this Superfund site, including the fact it may have been the nation’s largest holding site for nuclear weapons, and where radioactive material for the Manhattan project was stored (see this Wikipedia entry) but leaving that aside, can there be any excuse for Tom Wilber and the Binghamton Press raising the issue of salinity and trying to pin it on gas storage without mention this source of chlorides? Where is the balance? Where’s the attempt to get all the relevant facts?

That last question, of course, presumes Wilber is interested in any facts that don’t support his own view. That was ok when he was doing his own blog, of course, and it’s even ok on the editorial page where the idea is to challenge thinking and offer a point of view, but shouldn’t the Binghamton Press hold itself to a higher and more objective standard on its news pages? Aren’t its readers entitled to that? And, while we’re at it, aren’t they also entitled to know Gas Free Seneca and all those Ithacans (e.g., Sandra Steingraber) opposing this facility are financed by the Park and Sustainable Markets Foundations? Wishful thinking on my part, I guess.