There may be no bigger phony among fractivists than Bill McKibben, who continues to flirt with extremists and violence aided by his trial lawyer friends.

Bill McKibben loves white sheet cowards who flirt with violence, while extolling non-violent “direct action” and “rebellion,” a fact we noted in an earlier post. Rockefeller front groups such as 350.org and the Sustainable Markets Foundation, where trial lawyer and Fractivist Rasputin Jay Halfon fund the dirty work through the back door. As we noted at the time, they “fire up the true believers with the fervor of religious environmentalism and then pat them on the back from a distance for jobs well done.” Now, Bill McKibben is at it again, rewarding a group known as “Beyond Extreme Energy” with his tweet of approval for what is the work of a clearly extremist group. 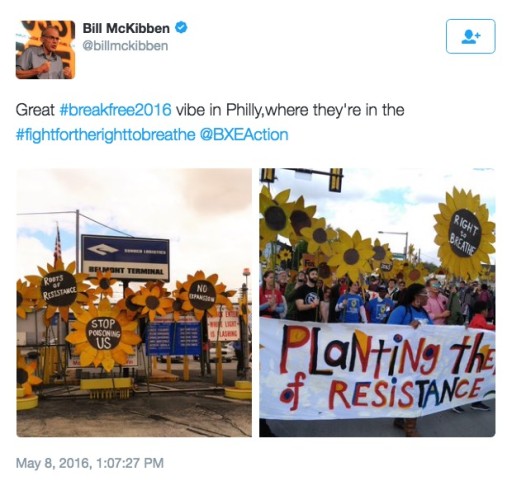 The event seems to have been hardly noticed by anyone other than Bill McKibben but the buildup was quite something, as this video demonstrates:

The point of it all, of course, was to get arrested, with the most important help solicited, at 1:34, being for a bail bond fund. It’s not clear anyone did get arrested, which may be the biggest indicator of failure, but that was the unmistakable intent and Bill McKibben loved it.

Yes, Bill McKibben, who plays the role of mild-mannered professor just seeking the application of wisdom to problem solving, is really a radical community organizer type at heart, not to mention a willing shill for Steven Rockefeller and his son who are developing LNG facilities in China as the family preaches divestment for the rest of us. He loves Beyond Extreme Energy and their “Rubber Stamp Rebellion.” Why? Because they do things like this, from their schedule (emphasis added):

Beyond Extreme Energy is a sophomoric play on words, the extremists giving a wink and nod to say “hey, join us, we’re the extremists” as they label oil and gas as extreme. That follows the radical playbook, of course; always accuse your opponent of what you’re doing to put them on the defensive. The leadership consists of people such Jimmy Betts (center) and Jerry Lee Stewart III (right) who struck this self-indulgent pose for the cameras: 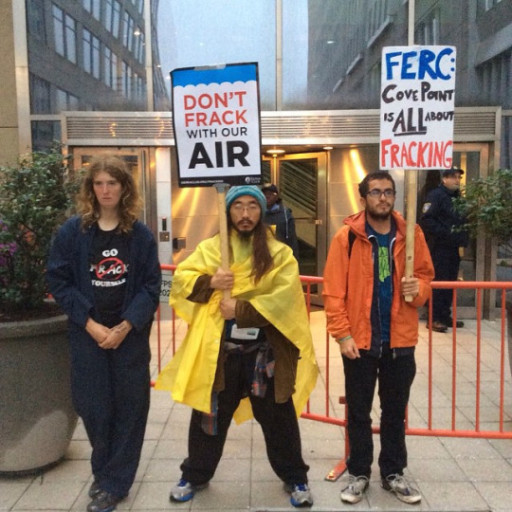 Jimmy Betts is an acupuncture and oriental medicine guy – a healer –  and a “Program Coordinator & Facilitator” for “The Great March For Climate Action,” whatever that means. He supposedly “once spent a whole year speaking only in dirty limericks.” An absolutely charming guy of great intellectual authority on energy matters.

Mr. Stewart is another serial protestor. He was recently arrested in Providence, R.I. and “charged with vandalism and obstruction of lawful pursuits” for chaining himself to the doors of a company his spoiled brat friends from FANG said was “to raise concerns about the link between climate change and the United States military.” He also writes puff pieces in radical joumals to extol Black Lives Matter (the group that chants “pigs in a blanket – fry them like bacon” about police) and their campaign for “collective liberation.”

When you dig into Beyond Extreme Energy, though, by going to their donation page, you find the operation is funded by something called the Center for Public Interest Research, Inc., which is affiliated with the National Center for the Public Interest. Inc. and is basically designed to serve the community organizing arm of that entity. Both are parts of the U.S. PIRG operation, about which we’ve written numerous times. Public interest research groups, or PIRGs, were created by Ralph Nader and others as a tool to fund raise for radical causes using college students as pawns.

They are also designed to be rain-makers for trial lawyers, which is where people such as Jay Halfon come into the equation. Halfon, now integrally involved with the Park Foundation, the Rockefellers, Bill McKibben and his 350.org, the Sustainable Markets Foundation and Earthworks, among others, served as executive director of both the New York State Trial Lawyers Association and the New York Public Interest Research Group (NYPIRG). Trial lawyers thrive upon and actively support PIRGs who set up opportunities for lawsuits.

The Center for Public Interest Research, the PIRG group behind Beyond Extreme Energy, is funded by Rockefeller Philanthropy Advisors, the Tides Foundation (Teresa Heinz Kerry) and other entities such as the Western Conservation Foundation which is, in turn, funded by the Rockefeller Family Fund, the same folks who, with the rest of the NRDC gang, ginned up the recent RICO attack on Exxon Mobil with the help of New York Attorney General Schneiderman who acts as an extension of the NRDC and brought on Weitz & Luxenberg trial lawyer Lemuel Srolovic to do the dirty work.

This is how special interest fractivist politics works. It employs useful idiots such as Jimmy Betts and Jerry Lee Stewart III to garner attention with outlandish stunts bordering on violence while proclaiming the opposite and rewards them with flirting praise from the likes of shills such as Bill McKibben, the whole bunch of them serving as nothing more than agents of trial lawyers and some of the wealthiest people on Earth. One imagines Jimmy and Jerry have no idea how they’re being used, which is why they’re so useful, of course.

Bill McKibben, though, does know. He knows who Steven Clark Rockefeller, Jr. is and that he’s investing in oil, not divesting. Steven’s father, after all, was his boss at Middlebury College. Bill McKibben knows who pays his bills and he knows all about Jay Halfon (his 350.org board member) and the Fractivist Rasputin’s purpose in life. Bill McKibben also knows exactly what he’s doing in flirting with the Beyond Extreme Energy characters and their not so non-violent behavior. He’s encouraging them in their outlandishness for the sake of doing the bidding of his own masters.