The several year permitting process has ended and construction has officially started for the Greenfield portion of the Atlantic Sunrise Project.

The Atlantic Sunrise Project is officially underway. The several year process of obtaining all the federal and state permits is now complete and construction of two compressor stations has begun. Pipeline construction will start within the next few weeks.

This critical energy infrastructure will provide abundant, affordable natural gas to families and businesses, as well as, support thousands of jobs and generate $1.6 billion in economic activity in our area. Once complete, in mid-2018, the Atlantic Sunrise will increase natural gas deliveries by 1.7 billion cubic feet per day. 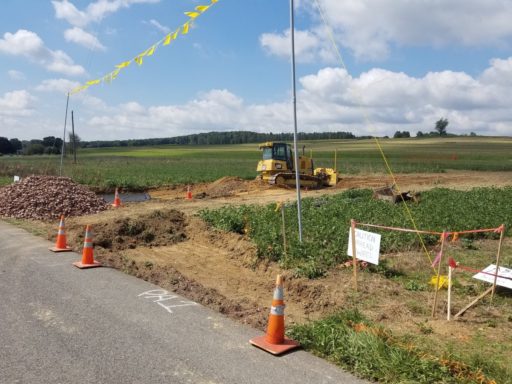 Williams Partners has contracted four primary construction companies to install the Atlantic Sunrise Pipeline throughout the eight counties in Pennsylvania. Williams is also encouraging all of its contractors to purchase goods and services from local businesses and has even created a mobile app to help them find local providers.

TULSA, Okla.–(BUSINESS WIRE)–Williams Partners L.P. (NYSE: WPZ) today reported that construction is officially underway in Pennsylvania on the greenfield portion of the Atlantic Sunrise pipeline project – an expansion of the existing Transco natural gas pipeline to connect abundant Marcellus gas supplies with markets in the Mid-Atlantic and Southeastern U.S.

“We are pleased to break ground on the greenfield component of this important project which will leverage existing energy infrastructure to deliver economic growth and help millions of Americans gain access to affordable Pennsylvania-produced clean-burning natural gas,” said Alan Armstrong, Williams’ president and chief executive officer. “We have worked diligently with stakeholders during this multi-year process to develop this project in a manner which not only meets, but often exceeds already high industry standards as reflected by the approval of state and federal permitting agencies following their lengthy and thorough review of this project.”

Williams has worked closely with permitting agencies to minimize environmental and stakeholder impacts, making modifications to more than half of the original pipeline route. In addition, Williams has worked with local stakeholders to provide an additional $2.5 million for conservation projects located within the project area.

“As we begin construction of the greenfield facilities, we are committed to installing this infrastructure in a safe, environmentally responsible manner and in full compliance with rigorous state and federal environmental permits and standards,” said Micheal Dunn, Williams’ executive vice president and chief operating officer. “Our construction personnel are experienced, highly-qualified professionals who have undergone extensive training to ensure that this important project is installed safely and responsibly.”

Pipeline and compressor station construction is anticipated to last approximately 10 months, weather permitting. The nearly $3 billion project, which is designed to increase natural gas deliveries by 1.7 billion cubic feet per day, is scheduled to be placed into full service in mid-2018.

“Our union members have supported the Atlantic Sunrise project throughout the three-year permitting process and we are thrilled that construction is now underway. We can now make good on our promise to install this massive energy infrastructure project in a safe, responsible manner,” said Dave Horn, LECET business development, LiUNA. “This step forward shows that the Commonwealth of Pennsylvania is serious about job growth, expanding the manufacturing industry and providing families and businesses access to an abundant and affordable natural gas supply. This project will not only benefit the construction trades unions that will build this project, but will also provide direct economic benefits to communities in the project area and the Commonwealth.”

During peak construction periods, the project is anticipated to directly employ approximately 2,300 people in 10 Pennsylvania counties. In addition, the project could support an additional 6,000 jobs in related industries and generate up to $1.6 billion in economic activity, according to researchers at Pennsylvania State University.

Williams is making it easy for its contractors to purchase goods and services from local businesses, last week launching a new mobile app – known as WillShop Local – to help connect construction personnel with local service providers.

Additional information about the Atlantic Sunrise project can be found at www.williams.com/atlanticsunrise.