Beyond Extreme Energy is a fascist group intent on shutting down any speech with which it disagrees and the Park Foundation funds it through Earthworks.

Extremist environmental protesters who don’t want to hear any viewpoints other than their own (i.e., fascists who love to suppress free speech), got a bit violent and ugly on Tuesday and shut down a meeting at Duke University (headquarters for insane environmentalism) where the Acting Chairwoman of the Federal Energy Regulatory Commission, Cheryl LaFleur, was scheduled to speak. Beyond Extreme Energy was one of the groups behind the illegal action. They’re funded by the Park Foundation and Earthworks, among others.

The lunatics at Duke forced their way into a meeting where LaFleur was going to speak, blathering on about FERC being a “rubber stamp” for the natural gas industry, which shows their complete and utter stupidity. The Beyond Extreme Energy extremists specifically object to bringing “fracked Marcellus and Utica gas” via Dominion’s proposed Atlantic Coast Pipeline to North Carolina.

Here’s the lunatics bragging about shutting down the meeting (emphasis added):

On Tuesday, March 28 activists with Beyond Extreme Energy (BXE) and NC Alliance To Protect Our People And The Places We Live (NC APPPL) successfully shut down a lecture to be given by Cheryl LaFleur, the acting chair of the Federal Energy Regulatory Commision, which oversees permitting for pipelines. The activists wanted to send the message that the Atlantic Coast Pipeline (ACP) is not a done deal.

While security was busy restraining one protestor who attempted to get in, two others managed to sneak into the room and take the floor with a banner reading, “Rubber Stamp Rebellion.” Lee Stewart of Beyond Extreme Energy explained to the room of students from Duke’s Nicholas School For The Environment the meaning of “Rubber Stamp Rebellion”. Stewart said, “The Federal Energy Regulatory Commission does not operate independently of the gas industry it supposedly regulates. FERC has only rejected one permit application in the past thirty years. This is simply unacceptable and FERC’s rubber stamping of gas industry projects has to end.”

Rather than facing the pipeline protestors, LaFleur decided to hightail it out of the building and cancel her speech, allowing the ACP opponents to declare victory.

Greg Yost of NC APPPL elaborated, “Today is a chance to learn about the people and the communities that FERC would harm with an Atlantic Coast Pipeline permit: people like Barbara Exum of Wilson County, Francine Stephenson of Johnston County, and Marvin Winstead of Nash County. These are just a few of the thousands of North Carolinians who would be directly affected and have their lives endangered by the pipeline.”

If built the ACP would bring fracked gas from the Marcellus and Utica shale fields of West Virginia down through Virginia and into North Carolina. In addition to threatening thousands of acres of National Forest, wetlands, farms, and woodlands, the ACP would destroy burial grounds and other sacred sites belonging to the Lumbee and Tuscarora tribes. The amount of gas the pipeline will bring to market would equal the greenhouse gas emissions created by 20 new coal plants.

This action comes on the heels of a two week long march along the pipeline route in NC and builds off of a multiyear campaign by BXE activists against FERC’s complicity with the fossil fuel industry.

Here are some pics of these numbskulls at the meeting: 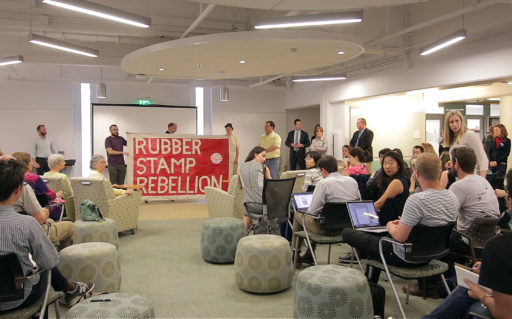 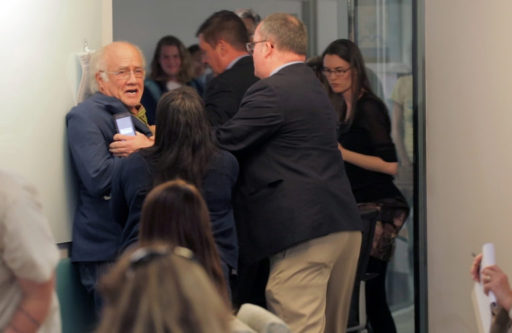 Editor’s Note: I agree with Jim; this is nothing less than fascism. These cowards are unable to debate on the facts and seek instead to shut down everyone who disagrees with them. Beyond Extreme Energy is a fascist group. But, who’s surprised? This is standard operating procedures for radicals and extremists today. What needs to be exposed is the fact they are directly funded by elitist special interest foundations operating on a tax-exempt basis.

One of these is the Park Foundation, which gave Earthworks $10,000 in 2016 to funnel to Beyond Extreme Energy. The Park Foundation, 350.org, the Rockefeller family (through the Sustainable Markets Foundation) and the nation’s trial lawyers (through U.S. PIRG) are all connected. Jay Halfon, the Fractivist Rasputin, is integrally involved with all these groups, sitting on the boards of Earthworks, the Park Foundation and 350.org and having served NY-PIRG and the Sustainable Markets Foundation in a professional capacity. They are behind this violence, this fascism. This is what I wrote about their relationships last year:

When you dig into Beyond Extreme Energy, though, by going to their donation page, you find the operation is funded by something called the Center for Public Interest Research, Inc., which is affiliated with the National Center for the Public Interest. Inc. and is basically designed to serve the community organizing arm of that entity. Both are parts of the U.S. PIRG operation, about which we’ve written numerous times. Public interest research groups, or PIRGs, were created by Ralph Nader and others as a tool to fund raise for radical causes using college students as pawns.

They are also designed to be rain-makers for trial lawyers, which is where people such as Jay Halfon come into the equation. Halfon, now integrally involved with the Park Foundation, the Rockefellers, Bill McKibben and his 350.org, the Sustainable Markets Foundation and Earthworks, among others, served as executive director of both the New York State Trial Lawyers Association and the New York Public Interest Research Group (NYPIRG). Trial lawyers thrive upon and actively support PIRGs who set up opportunities for lawsuits.

The Center for Public Interest Research, the PIRG group behind Beyond Extreme Energy, is funded by Rockefeller Philanthropy Advisors, the Tides Foundation (Teresa Heinz Kerry) and other entities such as the Western Conservation Foundation which is, in turn, funded by the Rockefeller Family Fund, the same folks who, with the rest of the NRDC gang, ginned up the recent RICO attack on Exxon Mobil with the help of New York Attorney General Schneiderman who acts as an extension of the NRDC and brought on Weitz & Luxenberg trial lawyer Lemuel Srolovic to do the dirty work.

Beyond Extreme Energy, in other words, is a handful of useful idiot fascists bought and paid for by the Park, Rockefeller and Heinz families, among others. Spread the word, tell the world and help expose these cowards who fund fascism.