New York will purchase a 100-megawatt battery system to back up its offshore wind fleet, which is expected to total 9 gigawatts of capacity by 2035. The battery will be supplied by South Korean developer 174 Power Global, who has announced plans for the battery system, which will store energy to be used during peak demand in New York City. NY utility Con Edison will buy the power and bid it into the wholesale market for seven years. The batteries will be housed in dozens of containers and connected to a nearby Con Edison transmission substation, which will be able to supply 400-megawatt-hours of power into the grid.

New York sees offshore wind as a crucial technology in its path to carbon neutrality and in achieving its Clean Energy Standard. Under NY’s Climate Leadership and Community Protection Act, 70 percent of NY’s electricity is to come from renewable sources by 2030. Current statewide plans total over.

New York executed contracts with Equinor Wind US LLC for its 816 megawatt Empire Wind Project and Sunrise Wind LLC (a joint venture of Ørsted A/S and Eversource Energy) for its 880-megawatt Sunrise Wind Project, both of which are expected to begin commercial operation in 2024. Together, these projects represent approximately 1,700 megawatts of offshore wind. In addition, the Long Island Power Authority is advancing the 130-megawatt South Fork Wind Farm, which is expected to be NY’s first offshore wind farm beginning operation in December 2022. 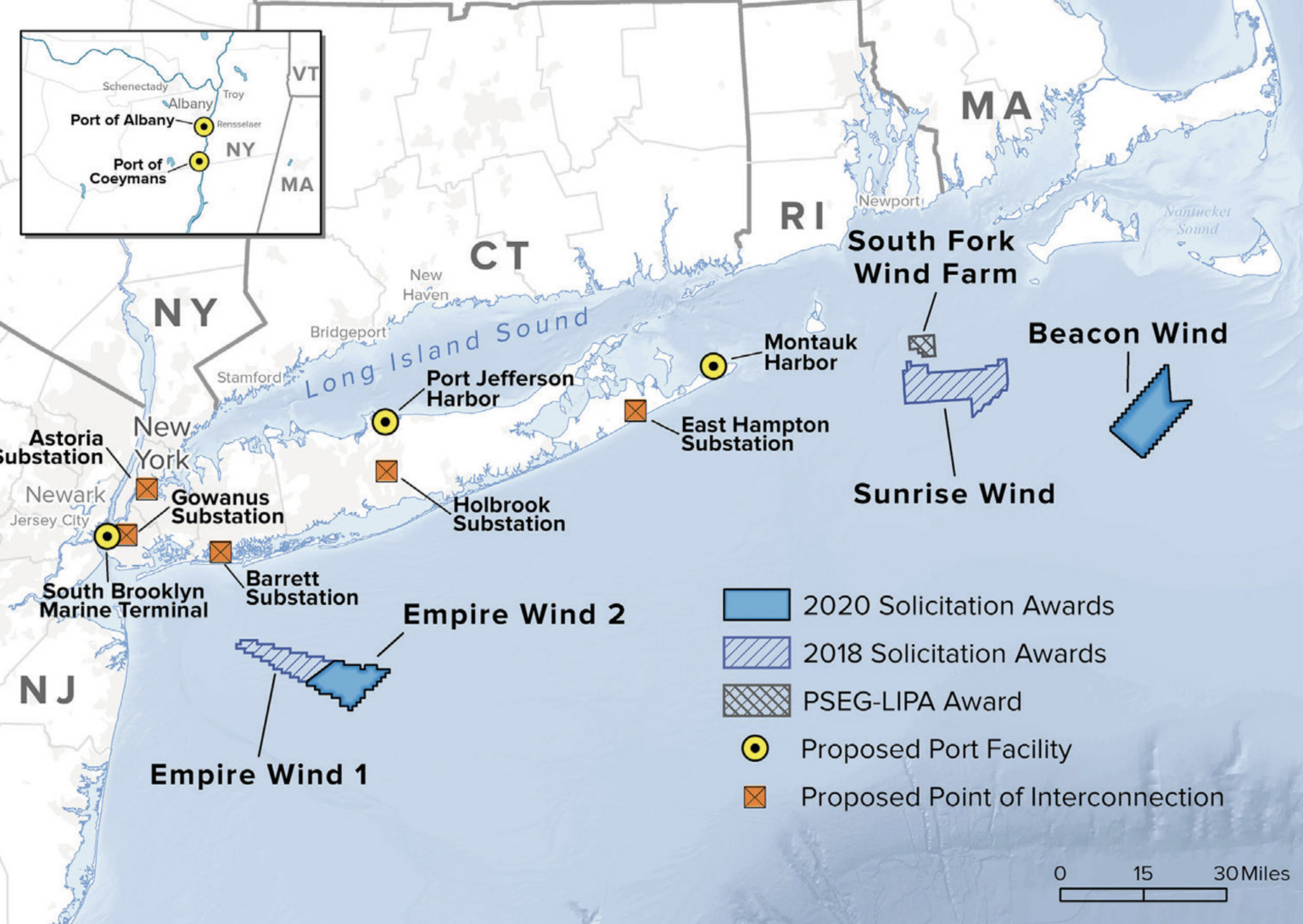 Use and Cost of Batteries

Currently, when the wind does not blow and the sun does not shine, conventional technologies (coal, nuclear, and natural gas) back up solar panels and wind turbines. But, with New York, and possibly the United States if Biden’s policies prevail, pursuing a non-carbon generating sector, batteries will be needed to store the excess power from wind and solar when they are producing power to be used when wind and solar resources are not available.

According to the Energy Information Administration (EIA), the capital cost of battery storage is $1,383 per kilowatt. If New York were to be back-up the 9 gigawatts of offshore wind power with batteries that capture the excess wind during times of peak performance, the cost of the batteries would be $1.24 billion in capital expense. EIA estimates that maintenance expense on the batteries would be $24.70 per kilowatt per year, making the total maintenance expense for the batteries to back up 9 gigawatts of offshore wind $0.2 billion a year.

New Yorkers would pay for the batteries despite having the technology already to back up the offshore wind units in their natural gas fleet. Further, even the offshore wind units are unnecessary given that sufficient capacity already exists with New York’s nuclear, hydropower, and natural gas generating capacity. It is just that natural gas is not a politically correct generating fuel because it emits carbon dioxide. Rates will begin to climb for NY consumers and businesses to pay for the political goals of their politicians.

New York is procuring battery technology to back-up its renewable units so that it can move toward a carbon-neutral generating sector. New Yorkers are oblivious to the cost of battery back-up power and other alternatives because they are told that intermittent wind and solar are cheaper than reliable coal, natural gas and nuclear power. Intermittent wind and solar are only competitive when the sun shines bright and the wind blows hard, which is not all that often and certainly not during peak demand in New York City.

New York City peak demand occurs during summer heat waves that are caused by stagnant high-pressure systems called Bermuda highs, often last lasting a week. During these high-pressure systems, there is no wind power generation. Wind turbines require sustained winds of 10 mph to move the blades and more like 30 mph to generate full power. During a Bermuda high, an occasional 5 mph breeze is what can be expected.

New Yorkers need to educate themselves to the alternatives and whether there are any benefits to a no-carbon future for going that route will cost them dearly. This battery procurement is only a start. Electric utilities will not provide New Yorkers with the alternatives because they are getting wealthy building the wind and solar systems politicians are demanding. These systems will be paid for in higher bills by New Yorkers.