States such as California are telling us they’re going to go 100% carbon free but the batteries required for storage to replace natural gas don’t exist.

Batteries are supposedly the answer to a 100-percent renewable generating system. Theoretically, having sufficient affordable storage of intermittent (wind and solar) electricity will allow a seamless move in an electricity-on-demand system that has helped the United States build the largest and most successful economy in the history of the world.

But, besides being extremely costly in their current form, the required number of batteries needed to back up intermittent renewables would be astronomical as the above citation for New York City attests. That does not mean that states and cities are not considering them. Florida Power & Light is planning to build the world’s largest battery and have it operational by 2021. It will be four times the size of the one in South Australia and four times the size of the one being built in Long Beach, California. Despite these initial projects, there is no “battery revolution” on the way, for technical and economic reasons.

Florida Power & Light’s battery, when fully charged, would be able to provide 409 megawatts of electricity for two hours. It will be used to back up a 74.5-megawatt solar farm operating in Manatee County and a second 74.5-megawatt farm to be constructed. According to the utility, the Manatee County battery project would accelerate the retirement of two existing fossil-fuel plants. The utility did not indicate what the project would cost.

The Florida Power & Light battery would be larger than the battery array being developed in Long Beach, California, which will be able to deliver 100 megawatts of electricity for four hours, with construction starting later this year. It will also be four times larger than the battery Tesla built in South Australia in 2017 that is estimated to cost $50 million.

According to experts, the lithium-ion batteries are too expensive and do not last long enough, limiting the role they can play on the grid. Relying on them for massive amounts of storage as more renewables come online is just not affordable. According to a 2016 analysis by researchers at MIT and Argonne National Laboratory, today’s battery storage technology works best as a substitute for “peaking” power plants, which are smaller facilities, generally fueled by natural gas that can operate infrequently, firing up quickly when prices and demand are high. Some believe that lithium-ion batteries could compete economically with natural-gas peaking units within the next five years.

According to the authors of the 2016 study, there are diminishing returns when a lot of battery storage is added to the grid and therefore it is not a substitute for natural-gas combined-cycle plants that can operate at any time, run continuously, and vary output levels to meet shifting demand throughout the day. It is not only the expense of the lithium-ion batteries that is challenging, but their limited battery life means they are unable to fill gaps during the days and weeks when wind and solar generation may fall due to weather conditions or other issues.

California requires all utilities in the state to get half of their electricity sales from renewable sources such as wind, solar, geothermal, and biopower, by 2030, and expects to reach 100-percent carbon-free energy by 2045. It intends to do the latter without the Diablo Canyon nuclear plant that provides 27 percent of PG&E’s energy and 9 percent of the state’s electricity. The Diablo Canyon nuclear reactors are scheduled to be retired in 2024 and 2025 despite its energy being carbon-free and requiring far less land than renewables. A solar farm in California requires 450 times more land to produce the same amount of energy as a nuclear plant, but only works when the sun shines.

The Clean Air Task Force, a Boston-based energy policy think tank, recently found that reaching the 80-percent mark for renewables in California would mean massive amounts of surplus generation during the summer months, requiring 9.6 million megawatt-hours of energy storage. Achieving 100 percent would require 36.3 million megawatt-hours. California currently has 150,000 megawatt-hours of energy storage from mainly pumped hydroelectric storage, with a small amount of batteries. This is an increase of 242 times the current pumped storage, and would require the construction of massive facilities (dams and impoundments) which are unlikely to be sited easily in California’s anti-construction environment or a massive number of battery storage facilities.

Assuming that the cost of lithium-ion batteries falls by a third, building the level of renewable generation and storage necessary to reach the state’s goals would drive up costs exponentially, from $49 per megawatt-hour of generation at 50 percent to $1,612 at 100 percent. 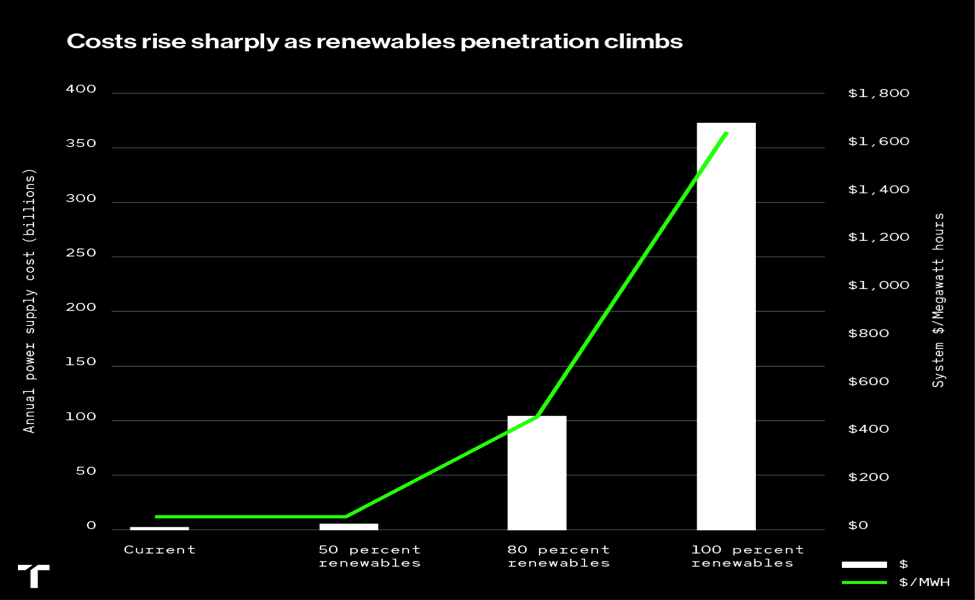 Similarly, a study earlier this year in Energy & Environmental Science found that meeting 80 percent of U.S. electricity demand with wind and solar would require either a nationwide high-speed transmission system, which can balance renewable generation over hundreds of miles, or 12 hours of electricity storage for the whole system. At current prices, a battery storage transmission system of that size would cost more than $2.5 trillion.

To make matters worse, California’s political leaders are forcing Californians to electrify everything—heating and cooling systems as well as cars. According to one estimate, to meet the demand generated by electric cars would require 50 percent more electricitythan today. This is occurring as traditional, reliable generating sources (nuclear and natural gas) are being retired to reach a system of 100 percent renewable power that will require back-up batteries at astronomical costs. As a result, Californians will see much higher prices and greater energy instability.

Batteries are not ready for prime time and the United States does not have the land area needed for 100 percent renewable power with back up battery storage. Nor can the country be swamped with the astronomical cost of such a feat. The United States needs a touch of reality: storage and renewable energy are not sufficiently reliable or cost-effective to allow for a 100-percent electricity future. Pretending they are while pursuing policies to destroy existing reliable sources of energy is a disservice to the country.

Editor’s Note: Who can, in this regard, forget this humorous take on the battery problem?