Just one day after a federal judge dismissed the ExxonKnew lawsuits from a few major cities, Baltimore decided its cash-strapped city should give it a go.

Baltimore is home to the curious. With a rich history of just being plain weird and relishing that weirdness in many fun ways, it is no wonder it is the landmark homestead of Edgar Allan Poe, The Hampdenfest Toilet Bowl Race where racers ride a toilet bowl downhill, the Honfest where people bring back the Beehive Hairdo, and of course, John Waters; need I say more?

Baltimore is so well known for crime that an entire series on HBO, The Wire, was based in the city and portrayed city corruption purportedly loosely based on former Governor, Martin O’Malley when he was the Mayor of the city. Another former Mayor, Sheila Dixon, was charged with felony theft, perjury, and fraud. In February of this year, USA Today reported Baltimore is the nation’s most dangerous city due to having such high murder rates. Mind you, I work in this chaos of love, intrigue, and corruption that is so affectionately nicknamed Charm City.

Charm City is also a huge Democrat stronghold for the state and it was really a surprise when a Republican Governor, Larry Hogan was elected running on a pro-fracking and pro-natural gas campaign. What was not a surprise is when the Baltimore City Council banned fracking. I was in attendance that day and shrugged this off as a minor setback. The same City Council later got its way with the Governor and he sadly signed a law banning fracking altogether. I have written quite a bit on this major blow to gas development in Western Maryland, but we still had hope of benefitting from the shale revolution via Cove Point and it’s now happening. 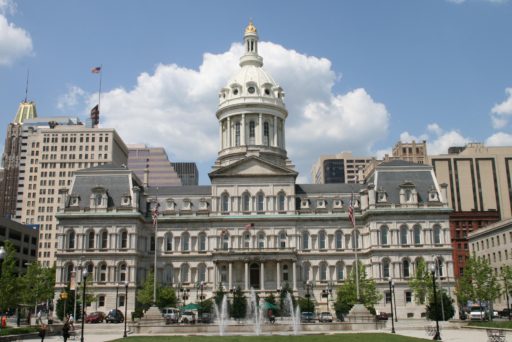 So, this is Maryland politics; all political correctness with rare intrusions of common sense and it’s getting worse. Even though the City, and later the state, banned fracking based on fearmongering and junk science, it still a shock to see the City of Baltimore wage a frivolous lawsuit against oil and gas companies and jumping on the already doomed #ExxonKnew strategy. The idea the City would waste money on this rather than try to fix a broken budget leaving schools without heat or air-conditioned rooms is simply stunning, a grotesque example of government malfeasance. Yet, it is the sheer timing of this endeavor that leaves me shaking my head.

Just one day after a federal judge delivered a devastating blow to #ExxonKnew campaigns waged by New York, San Francisco, and several others, Baltimore decided this is the time to file suit. The lawsuit filed against 26 oil and gas producers claims they alone are responsible for climate change, sea level rises, and increasing greenhouse gases to “a level unprecedented in at least 800,000 years.” Riddled throughout the brief, arecherry-picked references to NOAA, NASA, and the Intergovernmental Panel on Climate Change, combined with material from the Union of Concerned Scientists and Baltimore’s own predictions on temperatures and sea levels. This should be enough for any judge worth their intellectual weight in salt to toss the case, just as Judge William Alsup, a Clinton nominee has done.

What is clearly missing from the suit is any real evidence of what the 26 defendants have done that’s so bad. Instead, we get absolute drivel such as this:

“They have known for decades that those impacts could be catastrophic and that only a narrow window existed to take action before the consequences would be irreversible. They have nevertheless engaged in a coordinated, multi-front effort to conceal and deny their own knowledge of those threats, discredit the growing body of publicly available scientific evidence, and persistently create doubt in the minds of customers, consumers, regulators, the media, journalists, teachers, and the public about the reality and consequences of the impacts of their fossil fuel pollution. At the same time, Defendants have promoted and profited from a massive increase in the extraction and consumption of oil, coal, and natural gas, which has in turn caused an enormous, foreseeable, and avoidable increase in global greenhouse gas pollution and a concordant increase in the concentration of greenhouse gases, particularly carbon dioxide (“CO2”) and methane, in the Earth’s atmosphere. Those disruptions of the Earth’s otherwise balanced carbon cycle have substantially contributed to a wide range of dire climate-related effects, including, but not limited to, global warming, rising atmospheric and ocean temperatures, ocean acidification, melting polar ice caps and glaciers, more extreme and volatile weather, and sea level rise. Plaintiff, the Mayor and City Council of Baltimore, along with the Baltimore’s residents, infrastructure, and natural resources, suffer the consequences”

What a “Hail Mary” attempt at justifying a ridiculous initiative intended to distract from Baltimore’s real problems! These statements and implied correlation to climate change constitute a direct hit by the greedy trial lawyers behind these lawsuits on Judge Alsup for tossing the others. He rightfully said:

“Here, by contrast, defendants stand accused, not for their own emissions of greenhouse gases, but for their sale of fossil fuels to those who eventually burn the fuel. Is this distinction enough to avoid displacement under AEP and Kivalina? The harm alleged by our plaintiffs remains a harm caused by fossil fuel emissions, not the mere extraction or even sale of fossil fuels. This order holds that, were this the only distinction, AEP and Kivalina would still apply. If an oil producer cannot be sued under the federal common law for their own emissions, a fortiori, they cannot be sued for someone else’s.”

In dismissing the case he states:

“In sum, this order accepts the science behind global warming. So do both sides. The dangers raised in the complaints are very real. But those dangers are worldwide. Their causes are worldwide. The benefits of fossil fuels are worldwide. The problem deserves a solution on a more vast scale than can be supplied by a district judge or jury in a public nuisance case. While it remains true that our federal courts have authority to fashion common law remedies for claims based on global warming, courts must also respect and defer to the other co-equal branches of government when the problem at hand clearly deserves a solution best addressed by those branches. The Court will stay its hand in favor of solutions by the legislative and executive branches. For the reasons stated, defendants’ motion to dismiss is granted.”

Alsup also highlighted one aspect of this I had not thought about before, and it rings very true here in Baltimore. What has the City done to prevent its own catastrophe? No doubt there are grandiose plans somewhere for the City to do something, but Baltimore can’t  even give its kids a decent classroom, so they’re going nowhere. No, Baltimore is playing games with trial lawyers while the kids suffer.

“Although plaintiffs allege that global warming has already caused sea level rise, Oakland and San Francisco have yet to build a seawall or other infrastructure for which they seek reimbursement.”

Baltimore’s lawsuit serves nothing more than the Mayor’s quest for additional money and attention a lawsuit might generate. It is going to cost the City millions in tax dollars to wage a losing war against the very organizations that have done the most in reducing climate change. Moreover, had it not been for this very Charm City Council, many Western Marylanders might be in a much better economic state with higher-paying jobs and real opportunities. Other Marylanders and other citizens of the world would also be benefitting from reduced emissions (thanks to Cove Point). The state would also be getting more more tax dollars with which to protect the City from… I don’t know, maybe itself? In any case, they don’t have a chance with this lawsuit and they know it. It’s a case of #BaltimoreKnows.

One thought on “#BaltimoreKnows? Baltimore Conspires with #ExxonKnew Trial Lawyers”