The Atlantic Sunrise has received its Pennsylvania DEP water quality certification. The sun is indeed rising over the Marcellus Shale and its landowners.

Pennsylvania, thankfully, is not New York. That simple fact was proved again earlier today when the Pennsylvania Department of Environmental Protection (DEP) issued water quality permits for the Atlantic Sunrise pipeline project. It’s going to happen. No games, no demagoguery, no unreasonable delay; just a DEP simple decision to do what the law provides and now this critical infrastructure is ready to go. 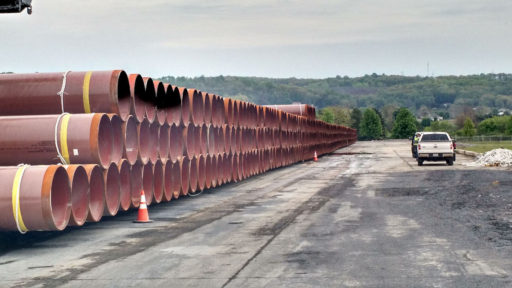 Here’s the word from DEP:

After thorough review, the Pennsylvania Department of Environmental Protection (DEP) has approved the Chapter 105 and Chapter 102 permit applications for the Atlantic Sunrise Pipeline Project. The pipeline will transport natural gas from northeast Pennsylvania to mid-Atlantic and southern states.

“DEP undertook a thorough review of these permit applications, and factored in thousands of comments from Pennsylvania residents,” said DEP Secretary Patrick McDonnell. “DEP’s technical staff reviewed the comments in evaluating the revised plans and final permit conditions that must be met throughout the construction process of this pipeline.”

The permits were issued with strict special conditions designed to ensure the strongest possible protections for streams and wetlands, as well as additional stipulations for landowners with private drinking water wells.

And, heres’s what Williams had to say:

The company received the Chapter 105 (Water Obstruction and Encroachment) and Chapter 102 (Erosion and Sediment Control) permits from PADEP on Aug. 30 and the Clean Water Act Section 404 permit from the U.S. Army Corps of Engineers on Aug. 29.

The receipt of these remaining state and federal permits will allow the company to immediately commence the process of requesting a Notice to Proceed with construction from the Federal Energy Regulatory Commission (FERC), targeting commencing greenfield pipeline construction in Pennsylvania this fall. The full project capacity is scheduled to be placed into service in mid-2018.

The company also reported today that, in advance of the greenfield portion of the project coming into service, it has received Federal Energy Regulatory Commission (FERC) approval to place a portion of the project into service early and, accordingly, expects to begin partial service Sept. 1, providing 400,000 dth/day of firm transportation service on Transco’s existing mainline facilities to various delivery points as far south as Choctaw County, Alabama. The partial service milestone is the result of recently completed modifications to existing Transco facilities in Virginia and Maryland designed to further accommodate bi-directional flow on the existing Transco pipeline system.

Micheal Dunn, Williams’ executive vice president and chief operating officer, commented: “The Atlantic Sunrise project has been through a rigorous, thorough review process in Pennsylvania and we are committed to installing this important infrastructure in an environmentally responsible manner and in compliance with the state’s high environmental standards.”

FERC authorized the project in February 2017, concluding that environmental impacts associated with the project would be reduced to “less than significant levels” with the implementation of mitigation measures proposed by the company and FERC.

Once complete, the Atlantic Sunrise expansion will help alleviate infrastructure bottlenecks in Pennsylvania, connecting abundant Marcellus gas supplies with markets in the Mid-Atlantic and Southeastern U.S. The nearly $3 billion expansion of the existing Transco natural gas pipeline is designed to increase deliveries by 1.7 billion cubic feet per day (enough to provide daily service to seven million homes). Williams Partners’ net investment in the Atlantic Sunrise project is expected to be approximately $1.9 billion. Pennsylvania State University researchers forecast the Atlantic Sunrise project to directly and indirectly support approximately 8,000 jobs in the 10 Pennsylvania counties during the project’s construction phase, resulting in an estimated $1.6 billion economic impact in the project area.

Additional information about the Atlantic Sunrise project can be found at www.williams.com/atlanticsunrise.

These permits reflect well both on DEP and Williams as well as its partners. The Atlantic Sunrise was a model of how to get it done. The company is to be congratulated. Landowners in the Marcellus Shale will be the big beneficiaries as this pipeline will allow far more marketing of this gas. It marks a huge milestone inboxed the fight against fractivists who realize this and know every new mile off pipeline brings more natural gas into the economy and demonstrates what it can do for the environment to the great detriment of their foolish opposition.

3 thoughts on “The Atlantic Sunrise Over the Marcellus Shale: It’s Here”