There’s an awful lot of green pandering and talk these days by fractivist politicians, but watch what they do, not what they say. You just might be surprised.

Two news stories from yesterday serve to make my point. The first is from Canada where, as Frank Brill of EnviroPolitics notes “after saying no to plastics, Trudeau says yes to the Trans Mountain gas pipeline.” Here are the relevant details (emphasis added):

Environmentalists cheered last week when Prime Minister Justin Trudeau announced that Canada would follow the EU in adopting a ban on single-use plastics. Those cheers turned to jeers today with the announcement below [preceding is intro by Frank Brill, excerpts from GlobalNews follow]…

Prime Minister Justin Trudeau announced on Tuesday afternoon that the federal cabinet has approved the expansion of the existing pipeline, which the government bought for $4.5 billion last year after regulatory and political uncertainty led Kinder Morgan to abandon the project.

“Our government has newly approved the Trans Mountain pipeline going forward. The company plans to have shovels in the ground this construction season,” Trudeau told reporters, adding that “every dollar” earned from the pipeline as well as the future sale of it will be invested in clean energy projects.Trudeau also said the government will be launching a new round of consultations on how Indigenous communities can get benefits from the project, including how they can get involved in the ownership and financial stakes in the project…

He added he knows the approval will raise a lot of questions for those with concerns about spills and the environmental impact of the project.

“To those who want sustainable energy and a cleaner environment, know that I want that too,” Trudeau said., noting there will be demand for Canada’s existing natural resources even as the world transitions to cleaner forms of energy.

“But in order to bridge the gap between where we are and where we’re going, we need money to pay for it … we should harvest some of what we have and invest the projects in what comes next, building the clean energy future that is already at our doorsteps.”

Owning the pipeline is expected to bring in $200 million in earnings per year for the federal government.

Frank seems surprised baby boy Trudeau would do a total meaningless plastics ban and yet approve a pipeline. It’s no surprise at all, though. This is what every fractivist politician does. They’re not stupid and they’re not going to throw away their own futures on some looney green theology when it comes to the important stuff. Oh, they’ll demagogue it to death and they’ll make all sorts of green gestures that don’t cost them anything (e.g., single-use plastic bans) but they get serious when the real issues are on the table.

Frank might also went to consider another example from his home state of New Jersey. It’s about New Jersey Transit’s plan to build a natural gas-burning power plant in Kearny:

NJ Transit is planning to build a natural gas-fired power plant in Kearny that would anchor an innovative microgrid system designed to power important rail lines during weather emergencies and power outages.

The facility, which would be located on the former Kopper’s Koke peninsula on the Hackensack River, will electrify the tracks and operating controls on NJ Transit’s Hudson Bergen Light Rail system, as well as portions of the Morris & Essex line and Northeast Corridor…

“When completed, NJ TransitGrid will power critical stations, terminals and rail lines to help our customers safely get to their destinations,” NJ Transit Executive Director Kevin Corbett said in a press release…

The power plant will be positioned in an industrial zone in Kearny near two substations that serve the Morris & Essex Line and the Northeast Corridor. Transmission lines and associated infrastructure will extend to substations in Hudson County to support limited operations and emergency transportation on Hudson-Bergen Light Rail System, the Northeast Corridor between New Brunswick and New York Penn Station, and between Maplewood and Hoboken on the Morris & Essex Line…

“This area has some of the worst air quality in the nation and building another natural gas power plant will only exacerbate that,” Jeff Tittel, director of the New Jersey Sierra Club said in a statement.

It’s hardly a surprise that Jumpin’ Jeff Tittel would be opposed and issue another of his balderdash claims dismissing everyone else’s needs and opinions along with facts such as these: 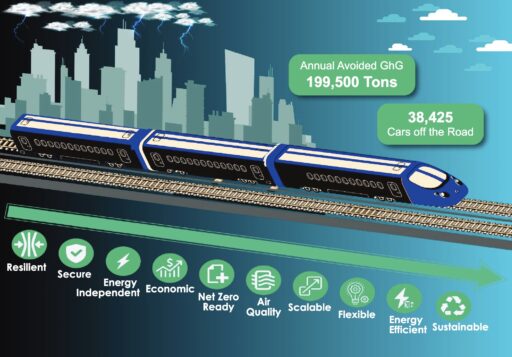 Jumpin’ Jeff Tittel is opposed to this, proving he’s not the least bit interested in air quality but, rather, only in the fractivist agenda of his gentry class funders.

He’s paid to do it, after all. What might be surprising, though, is that his buddy Phil Murphy hasn’t intervened to stop this project. He’s more than please to given Jumpin’ Jeff the free scalps of Wayne County, Pennsylvania citizens who are tired of being in the only county in the Commonwealth where natural gas resources can’t be developed. But, that’s it. When it comes to New Jersey’s interests it’s another story, just as in Trudeau’s world.

Those aren’t the only examples, either. We just saw the DRBC, chaired by Murphy, give the go-ahead for what is likely to be another LNG port at Gibbstown, and we saw the Philadelphia City Council do the very same thing after also being willing to sell out upstream neighbors on fracking. These four examples of recent vintage couldn’t provide a more example of why, when it comes to fractivist politicians, you must watch what they do, not what they say. You’ll feel better if you do.