Massachusetts, a/k/a New England, with the highest gas prices in the world during the cold snap, is the ultimate example of political correctness gone mad.

Baby it’s cold outside! This was predictable (and indeed, MDN did predict it). With the arrival of an extended cold period, because of a lack of natural gas pipeline capacity in New England, recent spot prices for natgas near Boston have spiked to more than $35 per thousand cubic feet (Mcf). It gives New England the dubious distinction of paying the highest average price for natural gas in the entire world.

The price for the same gas about 250 miles away in the Marcellus? Between $1-$2/Mcf. And yet the dunderheads in New England, like U.S. Sen. Elizabeth “Pocahontas” Warren, continue to block new pipelines in the region. “Stupid is as stupid does,” as Forrest Gump said. 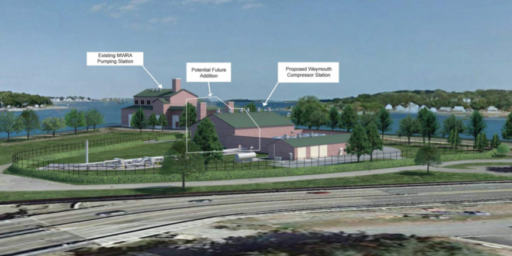 We hope our friends in New England enjoy paying through the nose and every other orifice they possess over the next few weeks, until the arctic blast subsides. Commonwealth Magazine has published an article by Stephen C. Dodge, Executive Director of the New England Petroleum Council, that explains things a bit (emphasis added):

This week, New England reached the terrible distinction of having the most expensive natural gas in the world.

You read that correctly: Not just the highest natural gas prices in the United States, or in North America, but on the entire planet.

When the spot-market price for natural gas hit $35.35 Tuesday at the main trading hub for all of New England, the Algonquin Citygate, that was more than 13 times more expensive than at the central US price-setting location, the Henry Hub in Louisiana. That’s the equivalent of filling up your car with $32-a-gallon gasoline.

Why is this happening? The short answer: New England does not have sufficient natural gas pipeline capacity needed to ensure reliable, affordable access to this clean-burning, abundant fuel produced right here in the United States.

Compared to homeowners in other communities across the country in states such as Ohio and Pennsylvania, New Englanders are paying hundreds of dollars more every year for electricity and home heating, all because everyone from local environmental extremists to New York Gov. Andrew Cuomo has relentlessly opposed every reasonable proposal to allow New England to secure the natural gas pipeline capacity we need.

Our region has aggressively transitioned much of its power generation in the last decade to natural gas to take advantage of the abundant supplies here in the United States as well as the environmental benefits that come with the use of this clean fuel. Today, data from ISO-New England, our regional power-grid operator, show that natural gas now produces 50 to 60 percent of the electricity we use in New England on an average day.

New England has also moved just as aggressively to increase use of natural gas to heat our homes, schools, and businesses. Since 2000, more than 200,000 residential customers have switched to or added natural gas heating throughout the region. Natural gas now heats more than 52 percent of all homes in Massachusetts and 54 percent in Rhode Island, according to the Northeast Gas Association.

But except for a modest increase in capacity on the Algonquin system and for some recent upgrades, increased natural gas pipeline capacity has been thwarted from coming anywhere close to keeping up with increased demand in the region.

Further, utilities are less able to plan 12 months ahead if energy markets are volatile. It’s why all six New England states rank in the top 10 of US states for most expensive electricity, up to 50 percent higher than the national average.

What’s even worse: This is an entirely needless problem for our region. New England is just 200 miles east of some of the most abundant, low-cost natural gas in the world from Pennsylvania’s Marcellus Shale region. With adequate pipeline capacity, access to this low-cost fuel could transform our regional economy and lead to the creation of thousands of new jobs. The opportunity is right in front of us–and New England is being denied that opportunity.

New England leads the world in many good ways – our quality of life and rich history, our colleges and hospitals, our beautiful mountains and beaches and colonial villages.

Leading the world in needlessly expensive natural gas is a distinction New England is inflicting on itself and can’t afford. This week has shown us, in dramatic fashion, the terrible price we’re all paying for being refused reasonable and long-overdue investments in our natural gas pipeline capacity.

NGI (Natural Gas Intelligence) tracks prices at over 100 natural gas trading points across the U.S. Here’s a chart showing the price at the Algonquin Citygate trading point (Boston) over the past 12 months:

And here’s a chart showing the price gas is bought and sold for at the Tennessee Gas Pipeline Zone 4 Marcellus trading hub, perhaps 250 miles from Boston: 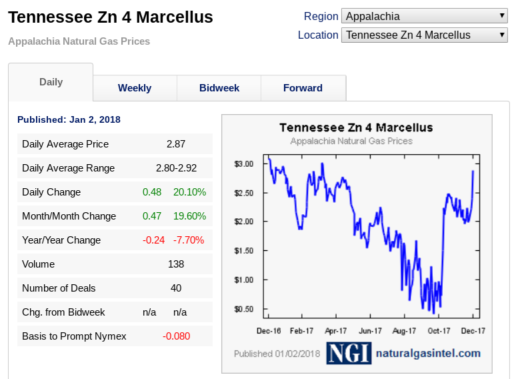 The only thing New England needs to iron out those nosebleed high rates are a few pipelines. What a travesty.

Editor’s Note: Jim, as usual, nails it. Massachusetts, a/k/a New England, is a politically correct basket case energy-wise and has no one to blame but its demagogic self.

It’s tempting to blame it all on their leaders, particularly the two snooty gentry class representatives, Markey and Warren, who represent them in the U.S. Senate. It was Bay State voters who put them there, though, and they’re but responding to the idiocy of folks who live in the Town of Weymouth, who thought they could overrule FERC approval of a natural gas pipeline project (Spectra’s Atlantic Bridge Project) by denying a local permit for a compressor station.

Fortunately, the Federal District Court for Massachusetts just threw out that bit of nonsense, noting Weymouth “denied Algonquin’s request..because of concerns of excessive risk of explosions, damage to the facility because of hurricanes, and negative effects due to odors, noise and ‘visual impacts.'” The Court also found:

“as part of its environmental assessment, FERC had already considered these issues, determining that no environmental impact study was required to proceed, and after the statutory comment period issued a certificate to Algonquin authorizing construction and operation of the compressor station. When FERC has already “carefully reviewed the very” proposal Defendants “seek to further regulate and, after considering environmental impacts, authorized the project,” [Weymouth’s permit requirement] “clearly collides with FERC’s delegated authority and is preempted.”

Local NIMBYs, in other words, don’t get to supersede FERC. Most of us understood that, of course, but the folks in Weymouth just knew they were smarter than the average bear and decided go for broke in ensuring Massachusetts always has the highest gas prices in the land. Perhaps the Court has now saved them from their arrogance.