If the initial signs are any indication, Andrew Cuomo is set to create another New York pipeline debacle as he attempts to appease gentry class fractivists.

Also, once again, there’s a holdup in New York; the Department of Environmental Conservation (DEC), at Gov. Cuomo’s behest, has delayed granting necessary permits for the project to begin. Can anyone say “Constitution” (see NY Gov. Cuomo Refuses to Grant Permits for Constitution Pipeline). Yesterday, three groups, including the Consumer Energy Alliance (CEA), the Business Council of New York State and New York State Laborers’ filed a petition with Cuomo with 10,000 signatures requesting he get off his rear-end and approve the New Market Project.

There are important differences between the stalled Constitution Pipeline and the New Market Project. The Constitution involves building about 125 miles of new pipeline, most of it through New York State. Dominion’s New Market Project involves no new pipe to speak of, but mostly just adding two new compressor stations (“Horseheads” in the Town of Veteran, Chemung County; and “Sheds” in the Town of Georgetown, Madison County), and upgrading a third compressor station (“Brookmans Corners Station” in the Town of Minden, Montgomery County). The extra compression horsepower serves to increase wholesale natural gas supply to National Grid, so that utilities can add more natural gas customers overall. Both pipelines will flow Marcellus Shale gas through them.

The New Market Project is an absolute no-brainer. Before the current era of fossil fuel irrationality and radical left politics, which reigns in New York State, this project would have already been built. But because of political calculations by the man-child Cuomo (a coward), this project is now being delayed by the state. Will it have the same fate as the Constitution? 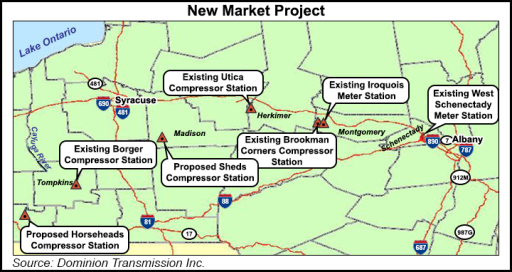 Here’s the press release announcing the petition filed with Cuomo:

Consumer Energy Alliance (CEA), the Business Council of New York State and New York State Laborers’ today submitted a petition with more than 10,000 signatures of New York state citizens to Gov. Andrew Cuomo asking him to grant the permits needed to begin work on the New Market Project, which would enhance reliability and improve access to natural gas to National Grid customers in upstate New York.

“By permitting the New Market Project, New York will see an influx of private investment, tax dollars, and much-needed job creation,” CEA President David Holt said. “More importantly, homeowners, retirees, businesses and those of us living on fixed incomes, will enjoy lower utility prices. For these reasons, CEA – and its tens of thousands of consumer members — have always strongly supported a robust natural gas pipeline network throughout the country and the Northeast. Pipelines are also the safest, most efficient and most environmentally friendly method for moving energy resources to market – and this certainly fits the bill.”

Rather than build a new line, the project would add natural gas pipeline capacity through an existing line in order to provide much-needed natural gas to National Grid customers in New York. The additional new supply of natural gas will further serve customers in Albany, central New York, and the greater New York City areas by allowing for greater supply to affordable natural gas. This will encourage job growth and economic development.

Additionally, the project will allow consumers to save an estimated $20 million in the first 10 years of the project’s life. New York localities will also receive about $4.4 million in annual property tax payments, allowing the state to further invest in municipal service like roads, schools, firefighters, and snowplows.

“The Business Council of New York State is pleased to join with New Yorkers from all walks of life in support of the New Market Project. The Dominion Project would address the growth in natural gas demand in the Capital Region and ensure that New York City customers would have access to new sources of reliable and affordable natural gas,” said Heather C. Briccetti, president and CEO of The Business Council of New York State, Inc. “The project will not only relieve upstream supply constraints, it will also play a key part in New York’s energy future by providing New York consumers with enhanced access to affordable and clean natural gas.”

During peak construction, a New York-based contractor will hire an estimated 320 new employees to construct the new facilities. The project, in total, represents $158 million in private investment, much of which will be spent within New York’s borders.

Editor’s Note: Yet again, the pipeline industry is so far behind the curve as to almost be on the other side. It’s excruciatingly painful, as a supporter of this and other pipeline projects, to read these pablum news releases from the industry. Who gets paid to write this stuff? What will it take for pipeline company officials to rise from their slumber, realize what’s really going on in New York rise and fight back against the corrupt and tyrannical Cuomo regime with tactics that actually work? Neither petitions, nor appeals to good government, wise energy policy and jobs are going to do anything to move a governor hopelessly indebted to gentry class fractivists and extremists who are committed to destroying the oil and gas industry.

There is apparently another New York pipeline debacle in the works and nothing will alter its inevitable course other than taking on these opponents head-on with lawsuits and effective political force. LIUNA support for the project is wonderful and we love the Consumer Energy Alliance but it isn’t flowery statements that are going to influence Cuomo. The problem is that Cuomo takes LIUNA for granted – that they will, in the end, vote for him regardless of what decision he makes on any particular project. If the union really wants the jobs it needs to take those votes away once and show him they are tired of being used.

Likewise for the pipeline company and the Business Council. Playing ball with a corrupt emperor such as Cuomo, as if this was just the normal political process, is a completed failed strategy guaranteed to produce another New York pipeline debacle; which is exactly what Cuomo wants so he can, once again, appease his gentry class puppet masters and radical environmentalist constituencies at no real cost. What Dominion and the Business Council should be doing is telling the world what’s really going on here and laying down the legal and political gauntlet. The failure to do so reflects an industry living in the dark ages.

4 thoughts on “Another New York Pipeline Debacle in the Works?”