Andrew Cuomo is clearly trying to position himself to run for President at some point, but his actions show why he’ll never go anywhere outside of New York.

Andrew Cuomo is an unusually good demagogue within New York, where city voters dominate and much of the electorate supposes electricity comes from an imaginary sun god. He’ll never make it outside of the Empire State, though. His brand of politics depends on a frightening ability to sell stupidity. His recent remarks about suing the Trump Administration over its executive order regarding water quality certification for pipelines demonstrate just how little this guy has to offer.

According to an article in the New York Law Journal, “Cuomo Says New York to Sue Trump Administration Over Executive Order to Facilitate Pipeline Building.” That much is hardly surprising; it would only be a surprise if Andrew Cuomo didn’t sue. Rather, what stands out in this excellent article are the incredibly shallow and, frankly, pathetic, arguments made by this man-child New Yorkers have chosen as their governor three times. Consider this, for example:

“If a pipeline cracks in our state, it’s our state that gets hurt,” Cuomo said. “He wants to use, basically, federal supremacy — he can seek and do it by executive order — to allow pipelines across our state.”

It isn’t Trump, of course, who is allowing pipelines to cross New York. That’s Federal law and it’s necessary for transportation of fuel by pipeline. Imagine what it be like if states were simply able to stop pipelines at the border. Suppose it was 1949 again, before the Transcontinental Pipeline that later brought natural gas from the Gulf Coast to New Jersey and New York  was built. Suppose Pennsylvania and Delaware had been able to say “no.”

We can be sure Andrew Cuomo would have had a quite different opinion had he been governor then, can’t we? But, he wants to deny gas to New England today. It’s why we have a Federal law and his position today is an unsustainable one, although hardly matters in his Machiavellian world of thought.

His “pipeline cracks” remark also reminds us how little this man knows beyond politics. It hearkens back to his comment five years or so ago when he worried about children falling down into gas wells. Interstate pipeline safety is a FERC matter, not a state one and that we’re supposed to be talking about water quality.

“I will fight him every step of the way. President Trump, his position is clear: fossil fuels are great, oil exploration is great,” Cuomo said. “I banned fracking, he thinks fracking is great, and now he has this geographic mass in the middle of his map called the state of New York and we’re a burden for him because we don’t want pipelines crisscrossing the state.”

New York doesn’t want pipelines? Then why is New York State using so much gas? Here are the stats from the Energy Information Administration: 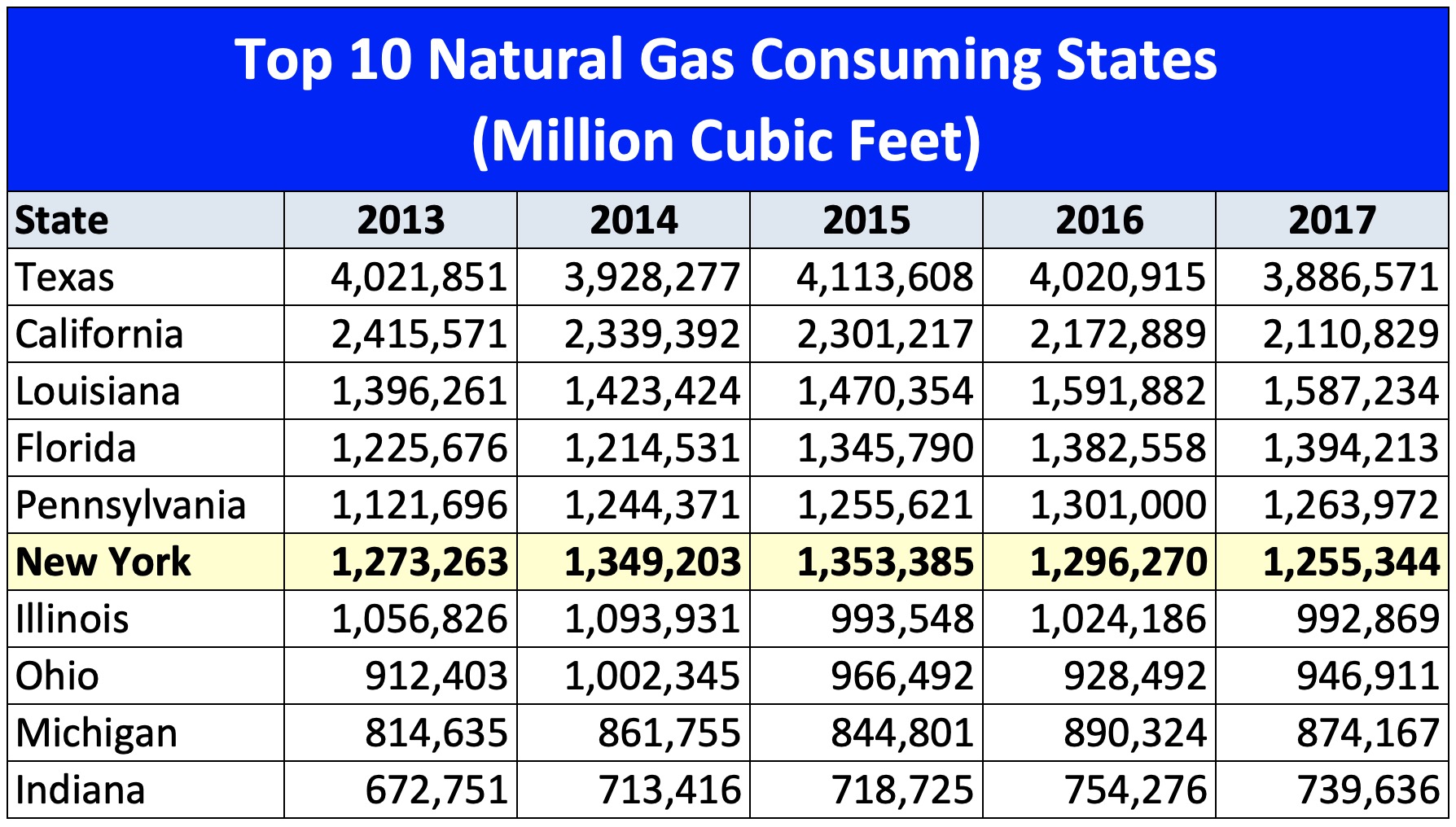 Look closely. Andrew Cuomo’s state used 1.26 quadrillion cubic feet of gas in 2017. That makes it the sixth largest consumer of natural gas in the country. It was No. 4 up through 2015, but the shale revolution took Pennsylvania somewhat higher the next year. Florida, where a huge share of New Yorkers have gone to escape Empire State also rose higher. Still, New York remains a humongous gas user doesn’t it?

Yet, Andrew Cuomo says “we don’t want pipelines crisscrossing the state.”  Think about that and what a pathetic excuse it offers for the lawsuit Cuomo says he’ll pursue. No one can possibly take it seriously…except that too many New Yorkers will. Why? Because they apparently suppose their heat magically comes from an imaginary sun god, summoned by turning a thermostat. Only in New York! No one else would ever fall for such nonsense.