Is it time to turn the gas off for New York City and let the people there reap the “benefits” of having a dictator, Andrew Cuomo, as their governor? On Friday, the NY Dept. of Environmental Conservation, thoroughly and completely corrupted by Andrew Cuomo, issued yet another rejection for the critically-needed Northeast Supply Enhancement (NESE) pipeline project. It was the last straw for Williams, the builder of the project, which has walked away from the project. Gas customers on Long Island, including parts of NYC, now face the real prospect of running out of natural gas (this is not an exaggeration). Andrew Cuomo is the grossest, most corrupt governor in NY’s history. 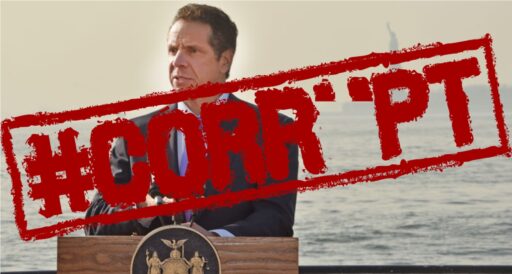 As soon as NY delivered its corrupt rejection of NESE, New Jersey’s equally corrupt Democrat Governor, Phil Murphy, did the same. It was a coordinated attack on the project.

Williams said in a statement they will not refile for the permits “at this time.” That’s a euphemism for “we’re walking away from this project, screw you.” We concur.

The $926 million NESE project was designed to increase Transco pipeline capacity and flows heading into NYC and other northeastern markets. In particular, Williams wants to provide more Marcellus natural gas to utility giant National Grid whose territory covers all of Long Island, including parts of NYC located on Long Island (Queens and Brooklyn).

There are a number of components to NESE, but the key component, the heart of the project, is a new 23-mile pipeline from the shore of New Jersey into (on the bottom of) the Raritan Bay–running parallel to the existing Transco pipeline–before connecting to the Transco offshore. Most of the pipeline would be located underwater.

The DEC along with the NJ Dept. of Environmental Protection (NJDEP) colluded to deliver a one-two punch on the same day. The corrupt DEC, at the specific direction of Cuomo, issued this statement on Friday:

DEC has determined construction of the NESE pipeline project would not meet New York State’s rigorous water quality standards. Construction of the proposed project would result in significant water quality impacts resulting from the re-suspension of sediments and other contaminants, including mercury and copper, and would disturb sensitive habitats, including shellfish beds and other bottom-dwelling marine life, clearly demonstrating that a default mixing zone is not appropriate for this project. New York is not prepared to sacrifice the State’s water quality for a project that is not only environmentally harmful but also unnecessary to meet New York’s energy needs.

NESE proposed to provide 400,000 dekatherms per day of incremental natural gas capacity to National Grid; however, National Grid issued a Natural Gas Long-Term Capacity Supplemental Report for Brooklyn, Queens, Staten Island, and Long Island (PDF) on May 8 that identified additional options that would meet the projected gap between demand and supply of natural gas without the installation of NESE project.

DEC conducted a comprehensive review of the NESE application and supporting materials, as well as the more than 16,000 public comments received on the application, before reaching this decision. DEC subjects all applications for environmental permits to an extensive and transparent review process that encourages public input at every step?

The rejection letter sent by DEC to Williams may be found here.

The NJDEP, which isn’t capable of independent thought and looks to NY for its guidance, issued this after NY went first.

The liberal sycophantic Newsday reported the news about NY’s rejection, rather gleefully, this way (emphasis added):

New York State on Friday once again rejected an environmental permit for a contested natural gas pipeline to the region, delivering a potentially fatal blow to the $1.4 billion project sought by National Grid.

The decision marks the third time the project’s environmental permit application has been rejected.

Of primary concern to the state agency in rejecting the permit by developer Williams Co. for the pipeline to supply National Grid’s downstate region were “re-suspension of sediments and other contaminants, including mercury and copper” that “would disturb sensitive habitats, including shellfish beds and other bottom-dwelling marine life …”

New York is “not prepared to sacrifice the state’s water quality for a project that is not only environmentally harmful but also unnecessary to meet New York’s energy needs,” the DEC statement said…

The pipeline as proposed would increase National Grid’s supply of natural gas supply by 14% to Long Island and parts of New York City, where the company said future shortages still loom…

Kimberly Ong, senior attorney for the Natural Resources Defense Council, an environmental group, said the state’s decision Friday “demonstrates that we can and must quit our unhealthy addiction to fossil fuels and grow the clean energy industries of the future.”

Faced with rejection of the same permit application last year, National Grid imposed a series of moratoriums on new gas hookups in the downstate region, disrupting building plans and setting off a firestorm of protest by businesses and homeowners whose ability to expand with gas was cut off. The moves also incurred the wrath of Gov. Andrew M. Cuomo, who ultimately threatened to revoke the company’s operating franchise.

In a settlement reached with the state Public Service Commission in November, National Grid agreed to pay $36 million in part to compensate those impacted by the moratorium, and to explore a range of alternatives to the pipeline.

This month, after public hearings to present a list of a dozen projects and concepts to address the shortage, National Grid narrowed the list to two options: the Northeast Supply Enhancement pipeline and a second that used enhancements to existing infrastructure, including the Iroquois pipeline, as well as energy efficiency and demand-reduction options to address a shortage that has also grown smaller because of the COVID-19 pandemic and warmer weather.

Kevin Law, president and chief executive of the Long Island Association, a business group that supported the project, said, “While it is unfortunate this project will not be moving forward, now is the time to put our offshore wind and solar energy projects into high gear and move them forward immediately.”

…But the Stop the Williams Pipeline Coalition, which has rallied for more than a year to block state approval, on Friday called the state’s decision “a tremendous grassroots climate victory,” adding, “Our movement isn’t going anywhere until all National Grid’s fracked gas proposals have been stopped.”

New Jersey and New York once again have denied key permits for a much contested $1 billion new pipeline that would cut through the former state and under Raritan Bay to supply the latter with natural gas.

This time, permit denials appear to have killed the Williams Companies’ proposed Transco Northeast Supply Enhancement project, as the company announced it would not pursue the proposal.

“While we continue to believe in the fundamentals of this project, we will not refile in New Jersey or New York at this time,’’ said Laura Creekmur, spokesperson for Williams, in a statement that expressed disappointment and called the decisions unfortunate.

For environmentalists and opponents, New York’s decision on Friday and New Jersey officials’ on Saturday marked a big victory in what has been a long-running effort to halt any new fossil-fuel projects that could increase global warming.

“It’s a major breakthrough in the battle against new pipelines,’’ said Jeff Tittel, director of the New Jersey Sierra Club, referring to New York’s argument it would impede its efforts to combat climate change. “That is a big sea change.’’

Without natural gas, many thousands (hundreds of thousands) more would have died in NY and NJ from the coronavirus than did. Do lib Dems comprehend that simple fact? Are they ready to own future deaths from lack of natgas energy?

Editor’s Note: Jim is absolutely correct. Fresh off the worst possible management of the WuFlu crisis anywhere in the world, a crisis where he needlessly condemned nursing home residents to the disease by forcing them to take COVID patients, Andrew Cuomo has very possibly condemned the entire metro area to die cold and in the dark some time down the road.

Unfortunately, though, Andrew Cuomo is the product of an urban electorate that is simply ignorant and itself corrupt beyond belief. There is no other way to put it. It’s an electorate that not only includes the radical true green believers and hedge-fund green scammers, but also business organizations who don’t know to fight and simply roll over upon request. And, then there are the idiot news folks who suppose a pipeline is no longer needed because the WuFlu has reduced demand. They are all getting the government they deserve.

This decision by Andrew Cuomo—and, make the mistake, he made it—is the sure sign he hopes to somehow replace Joe Biden on the Democratic ticket. He’s made a calculated move to shore up his green support to help distract from his WuFlu debacle. He might well have approved NESE in the shade of the WuFlu but now that opportunity has arisen in the form of Biden’s weakness he’s looking to leave New York’s gas problem to someone else to solve as he seeks to move on to the glory of being the most corrupt President in U.S. history.

5 thoughts on “Andrew Cuomo Is the Grossest, Most Corrupt Governor in NY’s History”