I’ve had it with plastic straw virtue signaling that has no basis in either fact or morals and simply reflects the self-righteousness of the pseudo-enviros.

This is because it is totally pointless and is emblematic of at least two things; the unserious nature of environmentalism today and the lust of business executives for such low-cost green-washing and the admiration of their country club friends. Happily, it’s not that way everywhere. There is a place where sanity yet reigns. There is an alternative.

The alternative is pointed out by Ed Driscoll, a contributor at my favorite website, Instapundit. He took note of this wonderful video on plastic straws:

This video captures it all; the phony stats, the journalistic malpractice, the plastic straw virtue signaling by pseudo-enviros, the demagogic politicians, the totalitarian impulse on the part of plastic straw banners and the reality. It illustrates the futility of this sort nonsense, which seems to pervade everything these days. It’s all meaningless blather intended to signal one’s green values to others without doing anything serious; like putting up a cheap plastic sign up on your front yard saying “Be Green.” It accomplishes nothing other. It only reinforces the self-pride of the person putting it up.

This self-pride, though, is very important to some folks, especially business executives who want a cheap way to look good among country club peers and with a segment of their market that thinks green in the same sort of shallow way. Hence, what we get is a rush to be being at the front of the fad as one business after another surrenders to green political correctness and tries to sell their customers on soggy, disgusting tasting and eventually collapsing paper straws for the sake of their own greenwashing desires. Or, worse, they try to lecture you into using no straw at all, as in this case of the waitress guarding her new found authority like Deputy Bernadette Fife.

It’s all so completely ridiculous. But, there is an alternative. Ed Driscoll talks about it in his intro to the above video. Naturally, as Driscoll notes, it’s a Texas business that has shown the way:

P. Terry’s Burger Stand chain, with their colorful midcentury modern Googie-influenced buildings, has the right idea: for everyday normal people, the plastic straw dispenser is fully loaded, but there is a “paper straws available on request” sign at the cash register, for those wishing to virtue signal their eco-wokeness.

Don’t you love it?  I do. I like every business to do the same sort of thing. For finer dining places where the wait staff passes out the straws, every waiter or waitress should be instructed to pass out plastic straws, but there should also be a glass container with paper straws on every table. This is how it should be labeled: 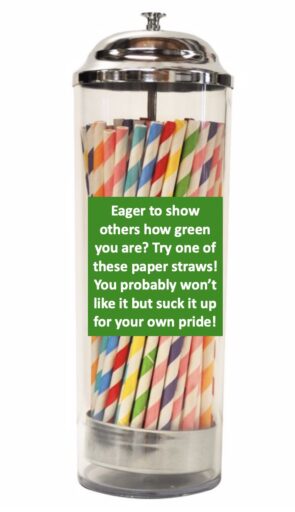 I wonder how many takers there’d be? Or, perhaps there could simply be two containers on every table, one labeled plastic and the other labeled paper. What would the results be then? The intolerant pseudo-environmentalists and their enablers wouldn’t want that, though. It wouldn’t provide the opportunity to insist others bend to their will and that’s what this is all about, isn’t it?

6 thoughts on “Is There An Alternative to Plastic Straw Virtue Signaling? Yes, There Is.”