The Russians know well what a threat American LNG is to their hopes and desires for dominance over Europe. The shale revolution is prying loose their claws.

We’ve already covered, in posts here and here, the historic nature of American LNG now feeding European demand for natural gas. It’s a beautiful story of how the shale revolution here in the US, made possible by private capital and ingenuity, is now reaching European shores to deliver some competition to the Russian bear and ensure Polish freedom, among other things, while delivering much needed economic development to rural America. I wrote about this back in March, noting:

I can’t wait for the first shipment of LNG out of Cove Point to head to Poland with a load of shale gas produced by my neighbors. Who would have thought it possible? Gas from places such as Clifford Township (right behind the Elk Mountain Ski Resort) being shipped overseas to help rescue Poland from the claws of the Russian bear!

Well, we’re not quite there yet with Cove Point, but it’s getting close. Meanwhile, American LNG has now landed in both the Netherlands and Poland out of Cheniere’s Sabine Pass export facility in Louisiana. And, it’s really annoying the Russian bear.

The delivery of the first load of American LNG to Poland has gotten a lot of attention in the commercial press, but the Russians are noticing too. An Economic Times report is typical of the former:

“We have all seen energy used as a political tool to hold countries hostage. And that is an act of economic aggression that needs to be confronted. And one of the most important actions we can take is to use our massive shale gas resources to begin shipping Liquefied Natural Gas overseas,” he added…

The U.S. is expected to become the world’s third-largest LNG supplier by 2020, he said.

The Russian Bear’s perspective is a little different. It’s conveyed by this article in RT (Russia Today), one of the press organs of the government (emphasis added):

The first US tanker carrying liquefied natural gas (LNG) has arrived in the Polish port of Swinoujscie. American LNG is expected to compete in Europe with natural gas piped from Russia and Qatari LNG.

“The Department of State has worked closely with European partners to diversify European energy supplies through new sources of natural gas, vital interconnectors and new facilities to import LNG. The United States congratulates Poland on this significant step to diversify its own sources of energy and to strengthen Europe’s energy security,” Washington said in a statement.

While Europe has been trying to find alternatives to Russian gas, the cost of shipping from the US remains high and demands significant infrastructure investment.

The LNG shipped to Poland is from the Sabine Pass liquefaction facility on the Gulf of Mexico coast. As of now, it is the only LNG exporting facility in the US since the start of the shale revolution. Last year, the first delivery of American LNG to Europe arrived in Portugal.

Poland has been one of the fiercest opponents of Russian gas expansion in the European market and wants to become a huge re-seller of LNG in Europe after building an LNG terminal at the port of Swinoujscie.

While Russia supplies about 10 billion cubic meters (bcm) a year of Poland’s gas needs, the new Polish terminal has a capacity of 5 bcm which can increase to 7.5 bcm. Last year, LNG made up less than 10 percent of Polish gas consumption.

RT does everything it can to minimize the prospects for American LNG, of course, while also maximizing the economic threat from Poland, which it would prefer to have act more like the vassal state the Russian bear wants on its border. The Ruskies do understand what’s at risk for them and even acknowledge its the American shale revolution that’s made it all possible. That revolution has taken place in rural America and is now in a second stage where we are exporting to the world the benefits the revolution has wrought. The bell of freedom is ringing a little louder in Poland now than ever, thanks to that revolution as well as their own.

The sheer impact of the shale revolution and American LNG on Polish freedom is, ironically, best captured in a Reuters photo by Brian Snyder that opens the RT story: 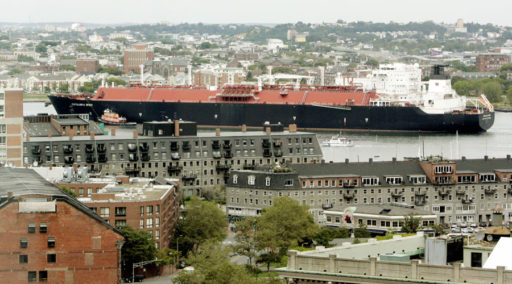 Just look at the size of that ship compared to its surroundings. It is a remarkable demonstration of the power of the shale revolution and American LNG. The Ruskies have every reason to fear what we bring to Europe with each load of American LNG; economic freedom produced in rural America and exported for the benefit of those on both ends. We  are prying loose those Russian bear claws one by one as we lift rural America.