Natural gas is leading the way in making the U.S. king of the hill again, a major LNG exporter, as the shale revolution leads America to energy dominance.

There is currently only one operational liquefied natural gas (LNG) export terminal in the United States; it has been operating since early 2016. Cheniere Energy is exporting LNG at its Sabine Pass facility with three trains and a capacity of about 2 billion cubic feet per day. Its total capacity is expected to be 3.5 billion cubic feet per day when all 5 trains are completed. Cheniere is in the process of getting contracts and financing for a sixth train. 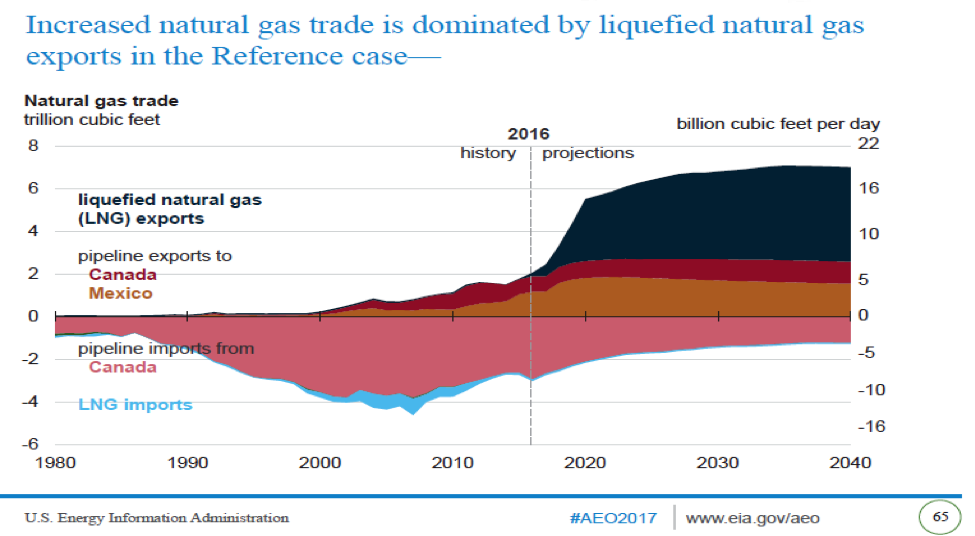 Below is a description and status of the LNG export facilities under construction and the date when they are expected to come online.

Currently, Sabine Pass is the only active LNG export terminal in the United States. It has three operational trains, and a fourth train expected to be operational this month. Also, a fifth train is expected to be completed in August 2019. The construction of a sixth and final train is subject to the availability of commercial contracts and financing. Each train has a capacity of 0.7 billion cubic feet per day. 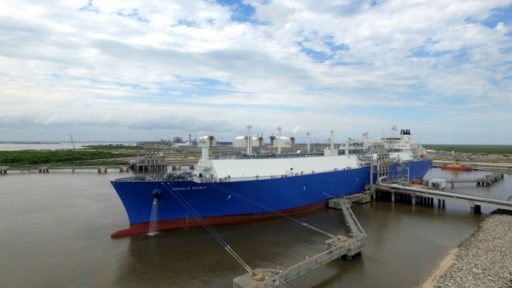 The Cove Point terminal is expected to be operational by the end of this year. It was constructed by Dominion Energy as an import terminal but is being retooled as an export terminal. Its capacity will be 0.82 billion cubic feet per day.

Cameron LNG owned by Sempra Energy is scheduled to begin operation in 2018. It has three trains currently under construction. The first train is expected to begin operation in early 2018, and the second and third trains are expected to start up during the second half of 2018. The three trains will have a capacity of 2.1 billion cubic feet per day.

Sempra Energy is also in the permitting stage of constructing an expansion to the facility, which would add a fourth and fifth train. Project completion for the expansion is expected sometime in 2019.

Elba Island is a relatively small-scale facility owned by Kinder Morgan with a capacity of 0.35 billion cubic feet per day. It was originally constructed as a regasification plant for imports of LNG and it is being retooled as an export facility. The project will use ten small scale liquefaction units, constructed in two phases. The first phase will begin service in mid-2018, while the second will come online in early 2019.

Freeport LNG is a larger facility with three trains currently under construction, which will begin operation between the end of 2018 and the third quarter of 2019, with a combined capacity of 2.14 billion cubic feet per day. A fourth train is under development. 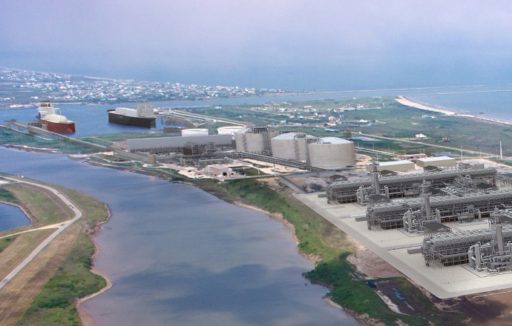 Corpus Christi is the sixth facility currently under construction on 1,000 acres owned or controlled by Cheniere Energy. It is being designed for five trains and is located on the La Quinta Channel on the northeast side of Corpus Christi Bay, about 15 nautical miles from the coast. Construction on the first and second trains began in May 2015. The first train is expected to begin operating in the first half of 2019. About 5,000 construction workers are working on the first three trains which will have a combined capacity of 2.14 billion cubic feet per day. The facility is currently 70 percent complete.

As countries look to diversify their fuels, natural gas is becoming a fuel of choice mostly for industrial and electric power uses. It is expected that LNG trade, which increased by 22 percent in the last three years, will increase another 21 percent by 2020. There are currently 170 LNG tankers supplying foreign ports—20 more than a year ago. And, making it easier to supply Asia, the Panama Canal was widened to handle larger LNG vessels.

There are now floating LNG facilities that cost less than on-shore facilities to construct, are built more quickly and can be moved to where they are needed most. Currently, there are 25 floating facilities worldwide—the first of which came online in 2005. 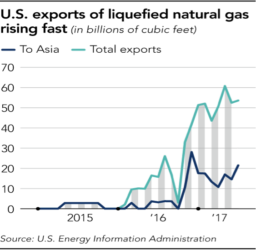 In 2005, only 15 countries imported LNG. That number has more than tripled in twelve years. But, the bulk of the demand growth is expected to come from Asia. Asian LNG prices are their lowest in more than a decade. Favorable prices along with low U.S. transport costs to Asia have increased Asia’s demand for LNG and for U.S. LNG exports. U.S. exports of LNG to Asia increased 12 times during the first seven months of 2017.

In the first seven months of 2017, the United States exported $139 million of LNG to China, surpassing its 2016 exports by two percent ($137 million). As part of the US-China 100-Day Action Plan, the United States and China agreed to allow Chinese buyers to secure long-term contracts and purchase LNG supplies from the United States directly rather than through third parties.

But China is not the only Asian country to want to increase its LNG usage. East Asia’s demand for LNG is expected to double by 2030 and some $80 billion in infrastructure is needed to meet that demand. Japan has been making significant investments in LNG terminal infrastructure since LNG is helping to replace the country’s nuclear power. Recently, Japan has announced that it will invest $10 billion in a public-private initiative to support the expansion of Asia’s LNG markets.

The United States is poised to become one of the top 3 LNG exporters along with Australia and Qatar. LNG export facilities are under construction and in the next few years the United States will have 10 or 11 billion cubic feet per day of LNG capacity. Countries are looking toward U.S. LNG as a secure supply of natural gas as they plan to use more of the fuel to decrease emissions and diversify their fuel mix.