There’s not much that’s more insane than the Sane Energy Project. It’s a group of crackpot fractivists who use attention-getting stunts to make it appear there is spontaneous opposition to fracking, pipelines and anything else oil or gas. They dress up in costumes and do protests to give the impression they’re just a bunch of harmless eccentric folks on a mission who won’t be ignored. The truth, if you follow the fractivist money trail, is this; they’re shills for hedge fund investors and other special interests. 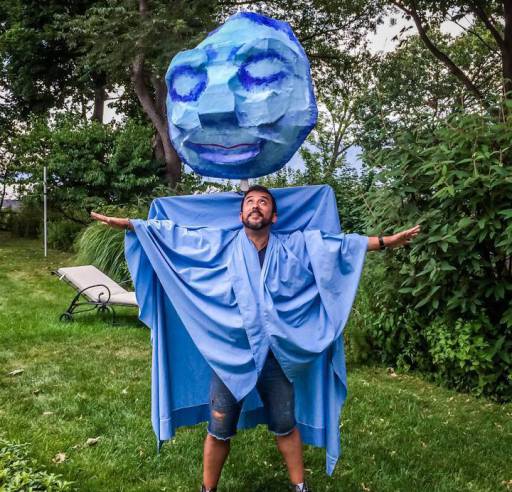 I wrote about the Sane Energy Project back in 2015 when the fellow to the right, Minister Erik McGregor, was making scenes to attract attention to the group. I had profiled him earlier here. He was then busy opposing the Constitution Pipeline and referring to himself as “Supreme Ruler and Magnanimous Omnipresent Leader” of some “occupy” group. He lived nowhere near the Constitution Pipeline, of course, but was there to participate in making a scene, taking photos and grabbing some headlines for the cause.

Now, the Sane Energy Project is focused on another Williams pipeline, the Northeast Supply Enhancement project to deliver much needed natural gas to the New York City area. Their slick website includes a page dedicated to the cause that promotes off-shore wind as the alternative. In fact, there’s another page that specifically hypes off-shore wind, one of the least economic forms of energy out there but one where corporatist investors are able to make a killing sucking government subsidies of the air, with gas still being required to supply the dispatchable energy when the wind doesn’t blow enough.

The slickness of the website and the over-emphasis on wind both offer early clues there’s something else going on here. The fractivist money trail confirms it. The Sane Energy Project donate page is the beginning of the trail. It tells us Sane Energy is not incorporated because it directs donors to make checks payable to “Multiplier” with “Sane Energy Project” in the memo line, and mail them to an address in Oakland, California. That’s a very address for a group supposedly focused on the Northeast and especially New York.

A little further down the trail we learn Multiplier, previously known as the Trust for Conservation Innovation” is a tax-exempt non-profit corporation organized under the IRS Section 501(c)3 rules for supposedly charitable entities. It has roughly $9 million in assets and spends about $17 million per year on “projects.” Sane Energy is one of 30+ projects funded around the world to promote what appear to be mostly environmental causes, all dripping with sanctimonious language about educating others and organizing their lives.

Still further down the fractivist money trail, we learn, via IER’s “Big Green, Inc.” site, who Multiplier and its Sane Energy Project really are. Here is what the data show as donations up through 2016 from three prominent fractivist funders: 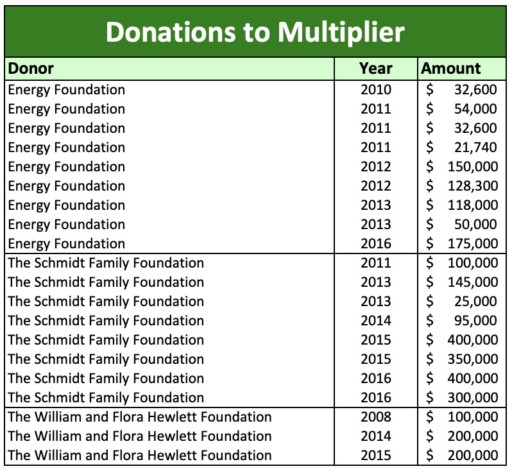 These three organizations are all major funders of fractivist causes but it’s the first two that are truly special. The Energy Foundation promotes all sorts of renewables investments and its biggest funder is the Sea Change Foundation, the dark money outfit financed by Nat Simons, a major hedge fund investor in corporatist green energy schemes. Sea Change is also closely connected with the NRDC gang, which is a Rockefeller family enterprise that includes the Open Space Institute and Catskill Mountainkeeper operations.

The Schmidt Family Foundation is also closely connected to the NRDC gang. It is the creation of Google guy Eric Schmidt, who was behind the Ivanpah solar boondoggle, where one of the wealthiest corporations in the world ripped off taxpayers for billions in corporatist subsidies for a bird-frying solar project that mars the desert. Schmidt’s Google directly funds various other fractivist initiatives, of course.

That’s who Sane Energy really is. They’re a bunch of malcontents, true believers and wackos financed to slow fracking, and stop pipelines for the purpose of creating corporatist subsidy opportunities for big-money special interests.

3 thoughts on “A Case of Following the Fractivist Money: How It All Works”