New York electric rates are already high and will soar in the future to pay the high cost of renewables and the 1,000 new miles of power lines they require.

It’s no secret most renewables are both cost and energy inefficient. Dick Downey recently explained (yet again) how emulating the German Engeriewende would impoverish more and more New Yorkers. The real cost of renewables and Andrew Cuomo’s plan to avoid natural gas and close Indian Point with them, though, is seldom talked about. It’s the 1,000 miles of new power lines that will be required to deliver the power they generate. There’s also the redundant dispatchable power required from somewhere to back up the power renewables do deliver. The economic costs will be completely unaffordable by New Yorkers of all stripes, not to mention the environmental impact of 1,000 miles of new power lines.

Skeptical readers are no doubt wondering where I’m getting this crazy 1,000 miles of new power lines, but I didn’t invent it. It comes from a letter written six months ago, by the New York Independent System Operator (NYISO) — the operator of New York State’s electrical grid — to the New York Public Service Commission (PSC), the state’s utility regulator. The subject is Andrew Cuomo’s plan to “Implement a Large-Scale Renewable Program and a Clean Energy Standard.”

The letter is written in bureaucratic and technical gobbledygook designed to obscure the message so it doesn’t get widely reported. The PSC, which is firmly under Andrew Cuomo’s control, surely got it, but don’t expect them to do anything about. Their job is to sit there and do what they’re told, and NYISO doesn’t want to ruffle too many feathers either, but they do want to be firmly established, for the record, as the folks who told us.

Here are the money paragraphs from the 16-page letter (emphasis added):

The anticipated renewable generation development and cross-state energy transfer increases are significant compared to the existing system flows. Transmission system constraints already materialize at a number of interfaces in the west to east and north to south directions across the State during certain system conditions. Additional renewable resources built in the western and northern portions of the State will exacerbate the transmission constraints that limit energy transfers across the State. The NYISO has begun analyzing potential new transmission facilities to help accommodate additional renewable resource build-out throughout western and northern New York. Based on the volume of new renewable generation resources and the locations for build-out projected in the DPS SEIS, the NYISO estimates that one likely transmission development scenario could require nearly 1,000 miles of new bulk power transmission, in addition to the AC Transmission and Western New York public policy initiatives now underway, to avoid frequent west to east transmission constraints in the future.

Those of around for previous debates over new power lines to serve New York City know how controversial these big ugly projects are compared to pipelines that are seldom noticed after being built. They generate almost imaginable fury from transplanted New Yorkers who imagine the view from their second and/or retirement homes will be marred.

And, there’s the cost, of course. Put aside the redundant dispatchable power needed when the sun doesn’t shine and the wind doesn’t blow. That cost alone is totally unaffordable and unnecessary, but now add between $400,000 and $500,000 per mile for new overhead power lines, not to mention all the related costs for sub-transmission lines and environmental impacts and we’re easily talking $500 million of additional expense on ratepayers and probably a whole lot more, not including annual operational costs. The cost of renewables is high indeed for New Yorkers. 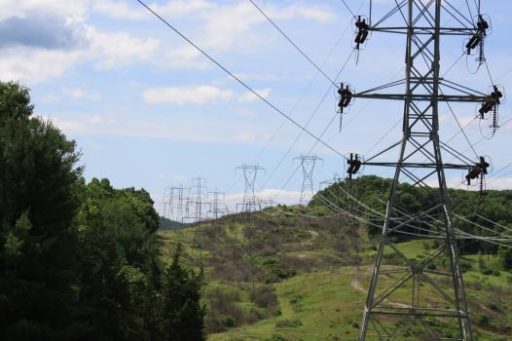 Combine this with the redundant power and the inherent inefficiency of most renewables systems (NYISO says wind power is 86% unavailable during pear hours) and we’ll see electrical rates that skyrocket to the moon. Especially hard hit will be downstate ratepayers who already pay some of the highest rates in the nation. This is the cost of renewables Andrew Cuomo proposes to impose on his constituents. NYISO, though, has covered its posterior:

Given the potential gravity and magnitude of the CES-related transmission additions, the NYISO believes it would be prudent for the Commission to study this question in depth before taking any final action to implement the 50% by 30 initiative.

That’s code language for “It’s all on you, Governor. We told you. You could have just used natural gas and avoided all this.”